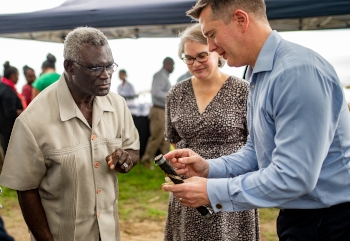 The Vocus Group has begun work to lay the part of the 4700-km Coral Sea Cable System that connects Honiara and Sydney, with a ceremony held in the Solomon Islands.

The fibre-optic system will link Honiara to Port Moresby, Papua New Guinea, and Sydney, Australia and deliver a minimum of 20Tbps capacity to both the Solomons and PNG. The system will have a total capacity of 40Tbps.

A statement from Vocus said 42 repeaters would be placed along the length of the cable between Honiara and Sydney, all of which were named after prominent Solomon Islanders.

“This is a large scale and complex submarine cable build and our team, together with our partners, are doing a great job. It’s exciting to reach more key milestones and for this cable system to be taking shape,” he said.

“Our progress to date is testament to the expertise in fibre networks and large-scale project management we have at Vocus, and the strong relationships we have with the Australian Government agencies and stakeholders involved.

“Vocus is very proud of our role in building critical infrastructure for the people, businesses and communities of Papua New Guinea and the Solomon Islands."

The Solomon Islands then changed its mind after the intervention of the spy agency, the Australian Secret Intelligence Service. Australian taxpayers will foot most of the $200 million cost of the cable, with the Solomons and the PNG making small contributions.

The contract was formally signed on 19 June 2018. The cable system, along with a 730km submarine cable system connecting Honiara to Auki (Malaita Island), Noro (New Georgia Island) and Taro Island, is set to be completed by the end of the year.