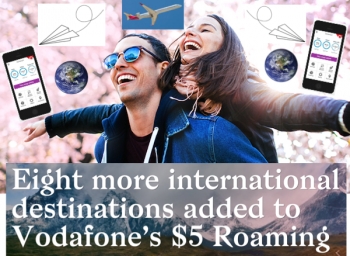 When in roam, do as the Voda roamers do – talk, text and use your data like you’re back here in Australia, for just $5 per day when you use one, two or all three of those services on a per-day basis.

As Vodafone’s Consumer Business Unit director Ben McIntosh said in his blog post, Vodafone “gives you the flexibility to travel to selected countries while using your mobile plan just like you do at home".

“The extra $5 a day allows you to tap into your plan inclusions — text, data and calls — so that you can stay connected and be productive while minimising the chances of getting stung with a nasty bill while you are out the country,” added McIntosh. More below.

“Remember, we only charge you $5 for the days you use international roaming, not for every day of your trip,” McIntosh continued.

“As a reminder, if you are heading across the Tasman to New Zealand, you can use Vodafone’s $5 Roaming product for free until 31 January 2018.”

The full list of countries you can pay $5 per day to roam like home to with Vodafone can be seen here.

Then comes a pointed jab at Telstra, whose equivalent product (PDF link) not only costs double at $10 per day for unlimited calls and texts in 58 slightly different but mostly the same countries, but only gives a disappointingly piddling 100MB per day in comparison.

To this point, McIntosh said: “Sometimes 100MB here and there to use while you’re roaming the world — like you get from some other Aussie telcos — just doesn’t cut it, which is why our $5 Roaming is built for customers who like to travel without rationing their data.

“With millions of trips being taken to and from our shores each year, there’s no denying we’re a nation of travellers. That’s why we’re leading the pack on choice, flexibility and freedom.”

For those already familiar with the countries that Vodafone previously offered, and just want to know the newly included countries, these are: Israel, Taiwan, Chile, Sri Lanka, Nauru, Jersey, Guernsey, and Isle of Man.

In answer to the question on “How will I be charged for $5 Roaming?” here is the answer:

Finally, you’ll need to be on a Vodafone plan that supports $5 roaming. You can try activating it via Vodafone’s “My Vodafone”, or contact Vodafone by phone if needed. 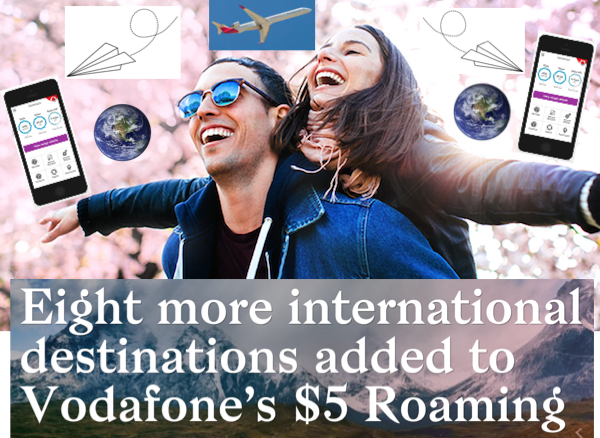