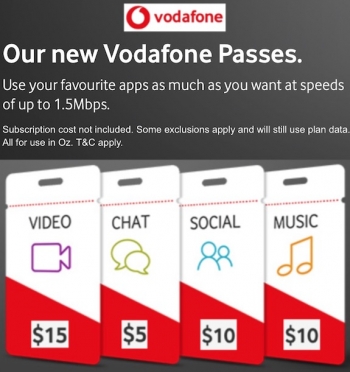 Already available in nine other countries, the Vodafone Pass is now in Australia, giving Red plan users the ability for "endless streaming on the apps they love".

Vodafone has launched a "revamped range of mobile plans including the new ‘Vodafone Pass’ available as an add on to Vodafone Red plans.

"Vodafone Passes offer worry free streaming in Australia at 1.5Mbps across four categories: chat, social, music and video at a cost of between $5 and $15 per month."

We're told the introduction of Vodafone Pass comes "following its success in other Vodafone markets around the world, with Australia being the tenth country to jump on board".

Each of the four passes can be easily added onto any SIM only and Vodafone Red plan through the My Vodafone App. Billed monthly, the passes allow unmetered streaming across the following apps at the speed of 1.5Mbps:

Vodafone’s chief commercial officer Ben McIntosh said that Vodafone Pass gives people the choice of tailoring their mobile plan to their own personal preference, all at a very affordable flat rate per month.

“The beauty of the Vodafone global network is that our customers in Australia enjoy the benefit of products and services that have been tried and tested in other markets around the world,” he said.

The new Red Plans follow Vodafone’s signature no lock-in contract structure, where consumers have the flexibility to select the plan, payment term and handset of choice.

“Right now, you can pay just $45 per month for 30GB of data (over 12 months, min cost $540) and that includes access to $5 roaming and the option to add on a Vodafone Pass for endless streaming,” McIntosh said.

“There’s simply no need to sign your life away on a leasing plan or pay excessive monthly costs for additional data.

“There are savings to be made and we encourage people to review their current plan and look for the best deal – it’s as simple as that.”

Vodafone says its "Red Plans are available in three simple price points: $35, $45, $60. Vodafone Passes are available from today and do not include app subscription fees" with more information at Vodafone here.

The announcement comes the morning after I wondered aloud in an article when a telco would offer a straight 1.5Mbps unlimited plan, with unlimited voice and text too.

This plan isn't quite at that level yet, but it's one step closer for at least some of the apps you want to use.

Also I note there's no YouTube option in the video section, which is probably very smart of Vodafone given how popular YouTube is with youngsters these days, although Vodafone does still offer its unlimited plans for those who truly do want unlimited data, starting from $60 per month.