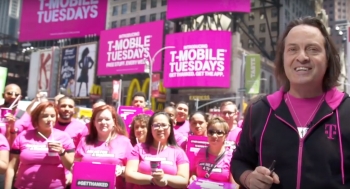 T-Mobile, a US telco that bills itself as an "un-carrier", is now offering up to 100 shares of the company to customers, free stuff every week and more.

When you think of the dominant telco in Australia, you naturally think of Telstra. The US equivalent is the mighty AT&T.

Into the mix in the US is T-Mobile, which nowadays bills itself as the "Un-carrier", in a move to smash through the incumbent walls of so-called competition, and now T-Mobile has made its latest move, which may well be its most boldly outrageous yet.

Now, the company has made a "nationwide simulcast" to millions of Un-carrier customers via the web and social media, with T-Mobile president and chief executive John Legere unveiling the company’s "eleventh iconic Un-carrier move — #GetThanked", which is billed as "a set of initiatives dedicated exclusively to thanking T-Mobile customers".

The 20-minute video of the event is embedded below.

The name of the latest move is "Un-carrier 11 and #getthanked" billed as "making history" and which is "dedicated exclusively to saying 'thank you' to customers, offers T-Mobile customers ownership in the company, free stuff every week, and free in-flight Wi-Fi".

But already, T-Mobile is topping this deal by offering even more, with this move called "Stock Up".

The full PDF with terms and conditions is here (PDF link).

The company says this is a "first-of-its kind program", that "could" turn millions of T-Mobile customers "into T-Mobile owners".

It’s clearly something no other publicly traded company has done before.

The self-described "Un-carrier" says it is offering "a FULL share of T-Mobile US (TMUS) common stock to millions of existing and new customers", and that "customers can grow their ownership up to 100 shares a year by doing what they’re already doing—recommending T-Mobile".

So, what’s the deal on the other free stuff on offer?

The company has announced "T-Mobile Tuesdays", a new app that "thanks T-Mobile customers with free stuff and epic prizes, every Tuesday".

T-Mobile has shrewdly partnered with "some of the best and coolest brands to thank its customers every single week, including Gilt, Domino’s, StubHub, Wendy’s, VUDU, Fandango, Legendary Pictures and Universal Pictures, Lyft and more … with new gifts and more partners unveiled every Tuesday".

John Legere, president and chief executive of T-Mobile, said: “Get ready for a gratitude adjustment, America! This Un-carrier move is all about giving you a good thanking! No strings. No gotchas. Just thank you for being a customer!

“At T-Mobile, we already wake up every day working for our customers – so I’ve decided to make it official and turn T-Mobile customers into T-Mobile owners by offering them stock. And we’re thanking customers every week with cool stuff from brands people love. For free. Every Tuesday!”

There’s also the offer of “a full free hour of Gogo Wi-Fi on your smartphone on EVERY Gogo-equipped domestic flight – for all T-Mobile customers".

Explaining the magnitude of this benefit further, T-Mobile says "that’s two-thirds (67%) of all connected domestic planes and millions of flights a year. Of course, texting on Gogo is still free for Un-carrier customers for the entire flight – but T-Mobile’s beefing it up with free in-flight messaging on iMessage, Google Hangouts, WhatsApp and Viber".

T-Mobile then exposes a truth we all know in our guts, which is that "most corporations say 'thank you' with rewards and loyalty schemes that are not much more than thinly veiled attempts to manipulate customers into forking over more of their hard-earned cash".

The stats preferred here are that "7 in 10 (72%) people see through it and agree loyalty programs exist to squeeze more money out of them".

Indeed, T-Mobile says "that’s why 90% of comments about loyalty programs in social media are negative and why customers don’t bother to use well over half (58%) of the programs they’re on".

T-Mobile says that with its ‘Stock Up and T-Mobile Tuesdays, you don’t have to spend more, stay longer, collect points, or qualify for special, elite tiers to be thanked for being a customer. Un-carrier 11 is about T-Mobile showing its loyalty to customers – not the other way around.’

So, when you get your initial share in T-Mobile, we’re told that "customers can stock up … and up … and up … just by doing what they already do – recommend T-Mobile".

The company will thank its customer advocates "by giving them another full share — up to 100 shares a year — of T-Mobile US stock for every primary account holder who takes their recommendation and switches to the Un-carrier. That’s roughly $4200 in just one year, based on the current share price!"

And that’s not all – as a special thank you to its most loyal customers, T-Mobile says it is "giving those who’ve been with the Un-carrier for five or more years TWO full shares of T-Mobile stock for each recommendation until 2017".

Legere added: “For me, there’s no higher praise than hearing a customer say they recommend T-Mobile to family and friends, so we wanted to get this right.

“And, what better way to thank you than sharing in the future of our company?! Now, T-Mobile customers own the place!”

The extra deal on the T-Mobile Tuesday is that the company is now "treating customers to dinner and a movie every week".

This means T-Mobile customers "can carry out a FREE medium two-topping Domino’s pizza, FREE small Wendy’s Frosty and FREE movie rental from VUDU, Walmart’s video on-demand service. And they can do it again next Tuesday. And the one after that. You get the idea".

Legere proudly boasted: “That’s right. We just did that. Until further notice, we’re treating our customers to dinner and a movie – all to say ‘Thank you’!”

T-Mobile Tuesdays will see recurring gifts, a surprise gift from a new partner and a chance to win something epic.

Surprise gifts will include things like "free movie tickets, free gift cards, free subscriptions, free ride-sharing and more. Tomorrow, everyone can get a free ticket from Fandango to the opening weekend of this summer’s blockbuster movie, Warcraft – just for being a customer".

And a "truly epic prize" is on offer every Tuesday. The first of these epic prizes is winning "a trip on a party bus to a private screening of Warcraft along with 40 of their closest friends with all the candy, popcorn and soda they can handle".

And, to see a calendar of possible prizes through June, check here.

Incredibly, there is still even more. You can read about it here.

So, would Telstra do this?

Well, it does already, in a way, with its Telstra Thanks program, but T-Mobile’s actions are far bolder.

Perhaps it’s something that Amaysim needs to think about doing, especially now that it is a publicly listed company.

Ultimately, perhaps Australia is just too small a country with too few people compared to the US for any telco to be so bold as to brashly copy T-Mobile very closely.

But who knows? In a competitive market, anything is possible, and impossible is nothing, as the late, great Muhammad Ali once said.

So, we’ll just have to wait and see, but especially if there are any more major network failures at Telstra happen this year, copying T-Mobile might be its most competitive action in years.