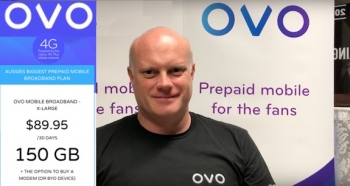 The NBN has been derided by OVO in the past as "Not Bloody Necessary", and while mobile networks need to evolve to 5G first to truly compete, OVO Mobile's 150GB plan for $89.95 is ready for you now.

OVO Mobile is a fascinating Australian MVNO or mobile virtual network operator. The company recently updated its plans to make them more competitive with more data for the money, and while there are even more competitive deals still out there, OVO's changes plus its exclusive content and Australian call support centre are all very strong positives.

Of course, not all consumers will care about the content, or even whether their likely rare need for customer support is answered by an Australian in OVO's headquarters in Sydney, Australia, but each MVNO needs its unique selling points, and OVO certainly is different in various very good ways.

OVO has also been in the news for all kinds of great reasons of late, too, whether dropping the price of its market beating 100GB plan to $69.95 back in late September 2017, creating a brand new eSports channel in Australia anyone can watch worldwide (and data-free to OVO customers), acquiring an incredibly innovative Australian AI-driven mobile broadcasting platform, doing deals to ensure its SIMs are available in Australia Post and 7-Eleven, bringing top streaming FM radio data-free to OVO customers, winning telco awards again and again, and enjoying great support from investors, with one recently putting A$5 million into the company.

Now comes news of OVO's latest customer-focused initiative, while solving bandwidth issues for mobile users (and especially those with major NBN access problems in the Optus 4G coverage area) by introducing its latest incredible plan – 150GB of data for $89.95 per 30 days, with no lock-in contracts and all on the Optus 4G Plus network.

OVO chief executive Matt Jones said: "If 2018 has told Australia telcos anything, it's that we as consumers expect more data for less.

"More than 60% of OVO's customers are under the age of 28. We're talking about a generation of renters who grew up on mobile, and typically leave home each day with a variety of connected devices they expect to be able to access wherever and whenever they go.

"With this plan, coupled with a portable modem, they can connect up to five devices at a time. We know this audience is multi-screening, they're streaming audio and video content while they're working, studying and even gaming. With our 150GB prepaid offering, they can do all of that on a single data plan, where ever they are.”

With this release, OVO says it is speaking to the largest single group of data consumers in Australia.

The company points to the latest Australian Bureau of Statistics (ABS) data, which shows that "at December 2017 more than 6.2 million broadband subscribers were on mobile wireless".

Stuart Bird, managing director of Optus Wholesale, said: “OVO continues to demonstrate its unique differentiation in the mobile market, now meeting the needs of the growing segment of data hungry, value conscious consumers. At Optus Wholesale, we are delighted to power this great new offer with the full strength of our award winning 4G plus mobile network.”

OVO is also catering to growing audiences of its OVOPlay content, such as the Australian Esports League announced in March, who almost exclusively stream entertainment on mobile devices.

Jones continued: "We are a mobile nation. With this plan, we're providing another option for Australian broadband subscribers who don't see the sense of paying for an Internet connection that's restricted to a fixed address.

"It's also a question of flexibility for people who use a variety of connected mobile devices like smart phones, laptops, tablets, e-readers and wearables. For example, we're expecting that as sales of our 150GB plan increase, we may also see those same customers downgrade their mobile plans to something that has unlimited calls and text, but less data.

"All this is heading toward a near-future of unlimited allowances on mobile data plans. Our 150GB release is another leap forward toward that day," Jones concluded.

Indeed, it may well bring forth the reality that, at least for some, the NBN is, or will be, "Not Bloody Necessary"!

Here's Jones speaking to me last week, before the news of this new 150GB plan was announced, but to which, from memory, Jones alluded was coming. It is a great interview where you'll learn a lot about the company's founding, its mission, its content, its values, its customer-centric focus, its people, plans, pricing and plenty more..

Enjoy – and kudos to OVO for continuing to push the telco envelope and not just being different, but better and may there be plenty more of it in the future.

More in this category: « Comms market operating ‘çompetitively’ despite market concentration: ACCC Split up NBN Co before rollout ends: ACCC »
Share News tips for the iTWire Journalists? Your tip will be anonymous