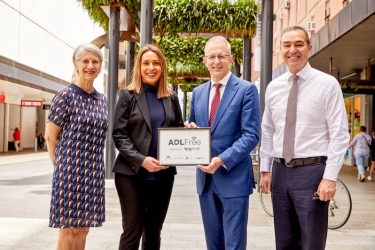 TPG Telecom has won a $4.8 million contract to refresh the City of Adelaide’s free Wi-Fi network and significantly improve the speed, security, and reliability of public internet access across the city.

More than 250 wireless access points will power the new Wi-Fi network, expanding wireless internet coverage and access across the city and many of its iconic sites including the Adelaide Central Markets, the Art Gallery of South Australia, the SA State Library and the bustling bars and restaurants of Peel Street.

In a significant upgrade to City of Adelaide’s existing Wi-Fi network, TPG Telecom advised that it will also replace the current mix of mesh-wireless, fibre and copper-based technology with a full fibre optic network that will provide superior speed, coverage and reliability for the city’s inhabitants and visitors. The latest WiFi 6 standard is to be deployed insuring that Adelaide is being severed with the latest WiFi technology, rather than the older WiFi 5 standard which most RSPs are still providing in home WiFi routers as part of their NBN services.

“The ADL Free powered by TPG Telecom Wi-Fi network will be the largest, free, city-wide Wi-Fi network in Australia and will deliver greater speed, capability and reliability for the people of Adelaide and its visitors,’ said TPG Telecom group executive enterprise and government Jonathan Rutherford.

“We are thrilled to work with the City of Adelaide to build and operate this essential piece of urban infrastructure and look forward to collaborating with more cities, councils and businesses to bring the benefits of connectivity to more parts of Australia in the future.”

Lord Mayor Sandy Verschoor said the new network will further enhance Adelaide’s reputation as one of the most liveable cities in the world.

“ADL Free powered by TPG will be an integral service for the community as Adelaide prepares to welcome back more tourists and international students, whilst also servicing the needs of all city users and residents,” said the Mayor.

“Not only will the new Wi-Fi assist businesses in the CBD and help position Adelaide as a leading centre of investment.”

The new network will be jointly funded by the Australian Government and City of Adelaide as part of the $699 million Adelaide City Deal.

TPG Telecom says it will begin deploying the new network early next year and will operate it for an initial five-year period.

The City of Adelaide deal is the latest, major contract win for TPG Telecom’s enterprise business which recently revealed it had been awarded a five-year, multi-million-dollar contract with Qantas to supply fixed and mobile voice services as the airline modernises its domestic communications network.

The customer wins follow the recent reveal of a new enterprise strategy to position TPG Telecom as the telco of choice for small and large business and government customers.

This first appeared in the subscription newsletter CommsWire on 15 December 2021.

More in this category: « Nokia and Rally bring broadband connectivity to thousands of multi-dwelling units in Canada Nokia Oceania official satisfied with 5G take-up in Australia »
Share News tips for the iTWire Journalists? Your tip will be anonymous