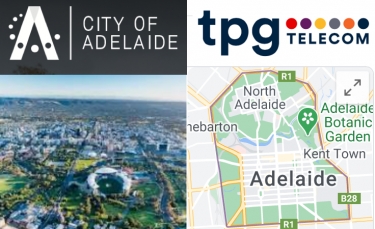 Having a gig in today's COVID-19 economy is welcome, having 10 gigs is even better, and having 1000 buildings fully connected to Australia's first city-wide ten gigabit network in rad Adelaide is a landmark, strategic achievement delivering world-class digital infrastructure.

TPG Telecom and the City of Adelaide are reporting that a significant milestone has today been reached with the rollout of one of the world’s fastest fibre optic networks now complete.

We are told that the City of Adelaide’s Ten Gigabit Adelaide project has reached its target of 1000 buildings fully connected, with philanthropic venture, The Light Cultural Foundation, connected today.

"Ten Gigabit Adelaide" is one of the City of Adelaide’s "key strategic projects" and today’s important milestone will mean that "thousands of business and organisations are now able to share and receive high volumes of data at speeds of up to a phenomenal 10Gbps".

The development is billed as being a "transformational network" that is "unleashing a wide range of new possibilities for businesses and organisations, without being inhibited by the restrictions and congestion often experienced with traditional internet services".

In 2018, the City of Adelaide partnered with TPG Telecom as the ‘Official Network Provider’ to install and operate the network and provide a range of high-performance services for the business community.

Lord Mayor Sandy Verschoor said connecting the 1000th building was a fantastic achievement and was done on time and on budget, and said:

“We are proud to usher Adelaide into a new era of connectivity with 1000 buildings now connected to the Ten Gigabit Adelaide network – delivered with our official network provider TPG Telecom.

“The landmark project – the first of its kind in Australia – represents a significant strategic commitment by the City of Adelaide to provide our city businesses with world-class digital infrastructure that will help create jobs and boost our economy. “The network is a great asset for local business – as hundreds have already discovered – and is a compelling factor to attract business from interstate or from around the globe,” Verschoor added.

Pachos continued: “Adelaide city businesses can now move into the fast lane, with enormous opportunities for industries such as health, education, video and media production, and IT and software engineering.

“Adelaide is now one of the fastest connected cities in the world, and we delivered this significant construction project on time and on budget using local contractors.

“Several hundred organisations have already connected to the network, and we expect demand to accelerate now the network has been completed,” Pachos added.

The Light Cultural Foundation – a philanthropic venture of Nick and Sophie Dunstone – has just been connected and requires ultra-high-speed data transmission to support live online performances.

“We are pleased to be working with the City of Adelaide and TPG to be part of the Ten Gig Community in Adelaide,” said Dunstone.

“My partner Sophie and I have exciting plans for this beautiful historical building at 63 Light Square, using world-class audio-visual technology.

“Adelaide has amazing talent and we are proud to be able to support emerging artists – through the use of new technology we will have the chance to open new and exciting opportunities for them.

“Being part of the Ten Gigabit fibre network is also going to be important as a way of future-proofing our enterprise, especially as 3D and holographic technology evolves. We know that we have the capacity to grow and innovate and shine a new light on Adelaide’s vibrant arts culture,” Dunstone concluded.