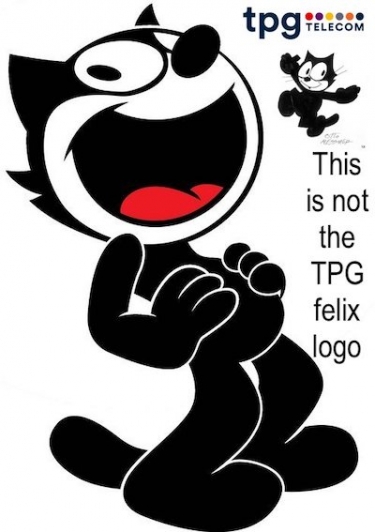 This is NOT the TPG logo. Images of Felix the Cat via Creative Commons 2.0 license.

Watch out, Circles.Life, TPG's sub-brand felix wants to belong in the hearts, minds and wallets of consumers, set to also compete with Telstra's Belong and all other low-cost players.

To belong or not to belong is a question TPG's new sub-brand "felix" presumably wants people to grapple with, along with being one of those semi-annoying brands with a lower case name that everyone's word processing software wants to capitalise.

Capitalising on the low-cost market as well as making a claim about being the first telco brand to be "powered by 100% renewable electricity", felix will be "certified carbon neutral and digital-only", and will launch over coming weeks, with full details of plans and pricing to come at that time.

Now, unlike Telstra's Belong, which also has an NBN offering, it appears that felix will be mobile only, given TPG Telecom Chief Executive Officer Iñaki Berroeta talks about a SIM card and a digital experience, although 4G and even 5G mobile broadband is certainly an alternative to having a wired or wireless NBN connection these days.

Stating that the felix model is "the way of the future", Berroeta also stated: "Seamless, sustainable and simple is what customers are telling us they want from their telco plan.

“felix is the first step in the merged company’s sustainability focus, and we’re taking this step to reduce the environmental impact from mobile phone use.

Berroeta also said felix is an app-based product which puts customers in control, which makes us think of the Circles.Life model, operating on the Optus network, which has been extremely aggressive in wanting to sign up as many people as possible by engaging its customer base to encourage their friends and family to sign up, too, with credits as rewards.

Berroeta said: “Sign-up will be a simple process via the felix app and once customers receive their SIM, it will be an entirely digital experience.

“COVID has accelerated the consumer trend away from retail and call centres, and we expect that shift to continue.

“We’ll announce the felix plan details closer to launch in coming weeks but we’re committed to making it a simple experience for customers.”

The company states that "felix will be part of the TPG Telecom Group house of brands which includes Vodafone, TPG and iiNet, and will operate on the company’s mobile network", and that "felix has been certified as a Carbon Neutral service by the Australian Government’s Climate Active initiative".

So, yet another mobile phone company is set to emerge, and hopefully, will push prices down further, especially for ever larger mobile broadband data caps, as 4G and 5G mobile broadband deliver the super fast connected mobility that a fixed NBN connection or even a fixed wireless connection just isn't able to.

Still, whether the felix cat will jump into a sea of carrier pigeons or the lions of the telco market is yet to be seen, as it's a dog-eat-dog world out there after all.

felix will definitely have to be nimble, affordable and different if it truly wants to survive and get the cream, and with the market a fickle place and affected by COVID-19, felix can't rely on having nine lives to get things right.

With any luck, felix will come out of the gate like a cat out of hell, with TPG having sharpened felix's pricing claws to catch as many customers as possible, because a good price war and telco cat fight is never unwelcome when you're a customer reaping the benefits of all that competition!