Telstra's new video shows its 5G download speeds are faster, but where's the upload comparison, too? 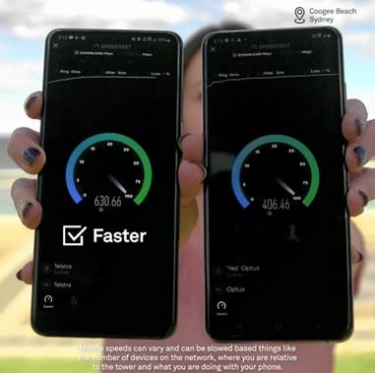 Telstra says it is proud of its 5G service, and has filmed a video showing just how much faster its 5G is to a competitor's, which is very timely with 5G iPhones arriving soon and plenty of other 5G phones already out there, but what about upload speeds?

A Telstra spokesperson reached out on Tuesday to proudly and justifiably boast of the noticeably faster 5G speeds that Telstra is delivering compared to what is at least one of its competitors.

While the competitor was delivering speeds in the low hundreds of megabits, Telstra was often at least 100Mbps faster. Sometimes a little less, sometimes a lot more, but in every single instance, Telstra unquestionably had the faster speeds - with the list below so you can see the results Telstra has reported for yourself.

But what about upload speeds? Back in the ADSL days, you usually got 750Kbps to 1Mbps upload speeds. HFC was around 1Mbps and eventually doubled to 2Mbps. The NBN changed this to what is usually tens of megabits, and while it depends on where you are, 4G can deliver multi-megabit upload speeds and much faster too, and 5G should be faster still.

Upload speeds are important so your Zoom and other videoconferencing meeting participants see you in higher definition, and so your children's teachers can see them more clearly during online classes. It also is the return path that sends your requests to the Internet much more quickly than networks of old. Online gaming also needs fast upload speeds so you defeat your enemies faster and have lower lag times for uploads and downloads.

It also has to be said that I don't doubt Telstra's 4G and 5G upload speeds are fast, and indeed, very, very fast. It simply would have been great to see an upload speed comparison too, because, well, why not?

Obviously, I asked Telstra about this and wondered whether they might be able to provide upload speed comparisons for this article, but was told Telstra hasn't done a side-by-side comparison of them as yet "as the focus of this video was on download throughput" and that they "will be in touch about upload speeds when we do something".

The slightly disingenuous part about that statement is that the video Telstra has shared of the speed tests is the Speedtest app from Ookla. This is one of the world's most famous speed test apps, and everyone but everyone knows that the thing that is done immediately after the app does a download speed test is to do an upload speed test.

So, unless Telstra's people purposefully stopped the tests immediately after the upload tests, well, the upload tests are there, in the bits of the video that weren't shared for whatever reason. Maybe the competitor on some occasions had faster download speeds, but maybe not.

That said, download speeds have always been THE most important metric, and with upload speeds hardly slouches in 2020, well, I guess we can do a Tony Jones from Q&A and take it as a comment.

So, after all that preamble now out of the way, what did Telstra have to say about its 5G speed win?

Well, Telstra said it was proud of its 5G, and noted two Telstra Exchange blog posts, the first being a Telstra Exchange blog post titled "We’re leading the 5G charge with our super-speeds and wider availability, and we’re not done yet" and the second titled "We’ve smashed another speed record with mmWave 5G" but also the Open Signal 5G User Experience Report from August 2020 which noes that "Telstra wins the 5G Download Speed Award", that "Telstra's 5G users observe the fastest overall speeds" and that "Telstra 5G users have seen some impressive improvements in their 5G mobile experience".

The report did also state that "Optus and Telstra tie on 5G Availability", but that said, some Telstra folk "decided to go and check [5G speeds] out for ourselves".

The Telstra spokesperson wrote that "We’re taking a big step to prove just how much faster Telstra 5G is than our closest competitor’s 5G network with side-by-side comparison tests. And we filmed it", which takes you to a video hosted on Telstra's Facebook page which shows the Speedtest app in action, but again, as already curiously noted, no upload speed comparisons against what is presumably Optus.

NOTE: A colleague just asked me "where is the video?". Telstra uploaded the video to its Facebook page, which you can't embed videos from, and while I could have screen captured the video and uploaded it to iTWire's YouTube page, I wrote this article late at night and didn't get permission for that, and without permission it is a copyright infringement.

So, as it clearly states above - you can see the video at Telstra's Facebook page here.

Anyway, Telstra's statement continues as follows: :"Armed with two Samsung Galaxy S20 5G devices, we put a Telstra 5G SIM card in one and the other telco’s 5G SIM card in the other and took both devices to six different locations around Sydney NSW to test them side-by-side.

"To make it fair, we made sure each and every test was within both telcos’ 5G footprint so we chose locations with five bars of 5G coverage on both networks.

"In each and every test we carried out on the day Telstra 5G came out faster and, on average, Telstra 5G was around 50% faster than the other telco’s 5G network in the tests we did.

"As more 5G devices come onto the market, we’re launching the video on Telstra’s social media channels to demonstrate to customers and consumers that Telstra has Australia’s best 5G network and that Telstra is ranked #1 for average 5G speed in Sydney, Melbourne, Brisbane, Adelaide and Perth".

Here is Telstra's chart of 5G speeds and results:

So, there you have it. Telstra's 5G downloads speeds are faster. This will be a consideration for those who are going to buy a 5G iPhone, or who have an existing 5G device.

The competitor's speeds weren't exactly slow, though, so if you do get the other company's 5G, well, it certainly won't be the end of the world, but if you're a Telstra customer, you will at least be getting the fastest speeds possible.