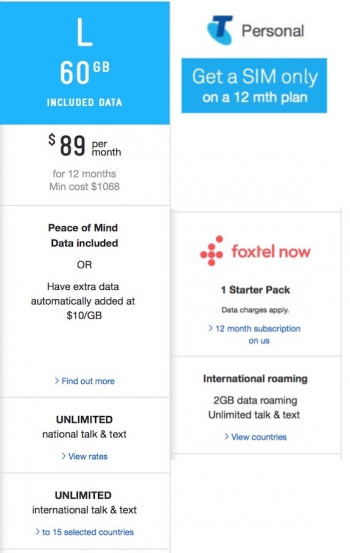 When Telstra announced its $10 per day international roaming, it was vastly better than the travesty of overcharging that existed in the past, but still twice the price of Vodafone's $5 per day roaming.

Vodafone, of course, also lets you use your existing Australian data allowance while overseas, whereas Telstra just gives you a paltry 200MB per day – which originally started at just 100MB per day, but was eventually doubled.

The real killer, however, is Telstra's $10 per day charge, which adds up very quickly when you're away, and especially so if you're away for a week or more.

Now, Telstra does have its super unlimited $199 plan, which lets you have whatever phone you want, unlimited talk, text and unlimited data for real, and which gives you 10GB of data to use while overseas per month, as well as unlimited calls overseas, with no $10 per day roaming charge.

Naughty Telstra doesn't list the $199 plan on its 24-month lease or buy CIS or Critical Information Summary as yet at time of publication, which is probably breaking some telco law but there you go – the CIS goes up to the $129 plan only.

Unfortunately, if you already have a phone you want, this $199 is a bit too expensive, and while it will obviously appeal to very heavy data users and those who travel a lot too, or who just have a lot of money or business reasons for this plan, Telstra has its $89 BYO plan as a very interesting alternative.

This plan also has no international roaming charge, and it gives you 2GB of data to use while overseas per month. The 2GB is much less than the larger data allocations more Vodafone users have, but it's better than 200MB per day the other plans have to pay.

If you go over the 2GB roaming limit, you will pay $10 per 500MB, which is expensive but do-able, and given the amount of often free Wi-Fi about the place, and inexpensive VPNs, 2GB should be enough.

Unlike Vodafone, there also appears to be no 90-day limit per year on international roaming for the $5 per day that Vodafone charges, or at least, none that I can see in the CIS or Critical Information Summary for Telstra's BYO plans, which you can see here. This actually puts Telstra's plan ahead in this regard, especially for frequent travellers.

To the Telstra people reading this paragraph above, and I know you'll be reading, if I got that bit about there being no 90-day limit on how much international roaming you can do as opposed to Vodafone's 90-day limit wrong, please tell me ASAP!

So, what else does the $89 BYO plan give you again?

Well, the $89 BYO 12-month contract plan gives you unlimited talk, text, SMS, MMS and Messagebank in Australia, 60GB of data, the Peace of Mind data component that limits you to 1.5Mbps speeds, unlimited talk and text to 15 countries, 12 months of Foxtel Now with 1 starter pack, and no charge for international roaming to 70+ countries with the aforementioned 2GB of data to use per month while overseas and the aforementioned $10 per 500MB after that.

For $89 per month, especially if you're a regular traveller who ends up paying lots of additional $10 per day fees, that's a very compelling deal.

Vodafone's roaming value is undeniable, giving me tens of gigabytes on my plan that I can use overseas if I need it for $5 per day along with unlimited calls and texts, and a choice between two different phone providers and phone numbers in Telstra and Vodafone, but in the past, Telstra's $10 per day charge was really, really annoying.

The $89 plan eliminates all of that, and given I have some international trips coming up, I'm very tempted to sign up, even though it is $50 per month more than the plan I'm on now.

In return for the extra money, I'll get that 60GB data allocation in Australia, the 1.5Mbps capped Peace of Mind data in Australia thereafter, and included international roaming so I won't be paying that $10 per day overseas charge, so the savings on those fees will really add up to offset the higher monthly price, but with so much more included than I'm getting now.

This $89 plan won't be right for everyone, of course, with pre-paid MVNO plans very popular for various reasons from low costs to big data inclusion and more, but competition has forced Telstra to do better, and do better it has.

I travel overseas again next Friday, so chances are very, very high this new $89 plan will be in my immediate future, and the next 12 months thereafter!

More in this category: « NBN Co finally enables DOCSIS 3.1 on HFC network Spark advances towards 5G services launch in two years »
Share News tips for the iTWire Journalists? Your tip will be anonymous