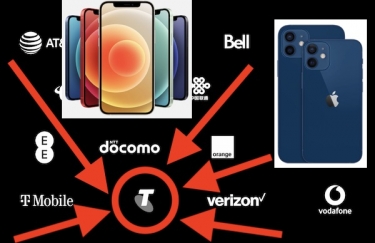 During Apple's iPhone 12 launch today, Telstra's logo was right up there with other global telcos as one of Apple's important 5G partners, with Telstra to offer all four iPhone 12 models for "a powerful 5G experience".

5G. With the iPhone 12 now officially supporting this standard at long last, the age of 5G is truly upon us, despite the fact Samsung and others have offered 5G models for at least a year, if not over the last year.

Even so, Apple is the last major player to enter the 5G race, with Apple's CEO, Tim Cook, announcing that more 5G would come to Apple, this presumably means 5G iPads to come, along with what you would imagine would be the option of a 5G-equipped, Apple Silicon powered MacBook, let alone future Apple Watches with 5G, too.

Now, one thing that we saw in Apple's presentation was that Verizon has mmWave 5G switched on, which in "ideal conditions" could get a 4Gpbs connection. Regular, non-mmWave 5G was said to get 1Gbps under ideal conditions - but mmWave is only available on US iPhones.

It's important to note that there is no mmWave 5G in Australia as yet, or at least, not on an official basis.

Even though Telstra and Ericsson "smashed the 800MHz mmWave 5G speed record" last month, September 2020, Telstra's Group Exec of Networks and IT, Nikos Katinakis said (among other things) that "mmWave spectrum will go to auction next year and will bring with it massive capacity over short ranges – making it ideal for high bandwidth applications that require a guaranteed level of throughput. Even though spectrum isn’t yet on sale, we already have mmWave sites live on our network for testing and optimisation."

Then there's the fact that Australia'a mmWave 5G bands will be in the 26Ghz range - way different to the 800MHz Telstra and Ericsson are talking about in the link above. Optus has a PDF submission it made to the ACCC about the 26Ghz band and "spectrum allocation lints", while Telstra's article at its Exchange Blog entitled "mmWave 5G: what you need to know" also talks about 26Ghz.

On Apple's own page on the communications bands that various Apple iPhones support, only the US model of iPhone 12, 12 mini, 12 Pro and 12 Pro Max support the US mmWave bands that are n260 (39Ghz) and n261 (28Ghz), and neither of those two bands are in the 26Ghz space, so based on the published specs, mmWave 5G support won't come to Australian 5G until an iPhone 13.

The Australian iPhone 12 specs specifically do not mention any Ghz bands, so unless there's some kind of surprise that is yet to be unveiled, Australian mmWave 5G bands will surely be supported in the iPhone 13 this time next year, but there's still PLENTY of 5G bands that ARE supported in Australia, with 5G still faster than 4G with lower latency - mmWave 5G will just be an even faster form of 5G.

Anyway, so when will Telstra have the iPhone 12 models available for pre-order and on sale, and what are its plans?

Consumer customers who pre-order an iPhone 12 on a $65 plan or above (M, L or XL) will receive 45,000 T+ Telstra Plus points to use towards our range of headset accessories.

Telstra has also provided a reminder about the current state of its 5G network, which you can also read more about here in my article from Monday this week titled: "Telstra's 5G coverage booms just in time for iPhone 12 5G launch".

With more than 2000 5G sites on-air across the country, more than 40% of Australians now live, work or pass through Australia’s best 5G network. Telstra 5G has begun rolling out in more than 60 cities and towns across Australia and Telstra 5G is in selected areas of more than 1,400 suburbs across the country. Telstra is also rolling out 5G to 75% of the Australian population by the end of June 2021, expanding its network to even more metro, suburban and regional areas. The telco has also "added more than 60 new 5G sites to its network in the busiest week of its rollout since the middle of 2020".

Telstra says it is ranked #1 for average 5G speed in Sydney, Melbourne, Brisbane, Adelaide and Perth (based on analysis by Ookla of Speedtest Intelligence data).

Telstra reminds us its "month-to-month plans have no excess data charges in Australia" so you won’t be charged "for going over your monthly data allowance in Australia but your data will be slowed".

Telstra also notes its customers "can choose to pay off their new iPhone over 12 or 24 months and enjoy our new month-to-month plans which give them the flexibility to change their plan once a month. If they leave, they simply pay out their device".

5G access is available on Telstra's Medium and above plans.

You can now get on a Telstra mobile plan on Australia’s best 5G without needing to insert a SIM card using eSIM.