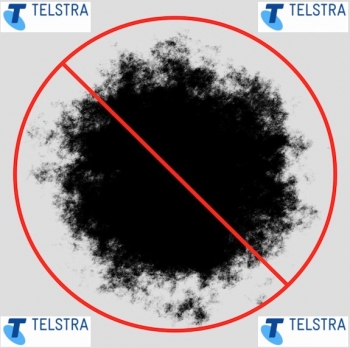 Telstra is making it easy for its customers in former black spot areas to make calls, with over 100 million made from those locations, so Chuckie's cry of "why didn't you call" can't be because you didn't have mobile service.

As part of the Australian Federal Government's Mobile Black Spot Program, Telstra has reached the triple milestones of 500 new base stations, over 100 million calls made via black spot towers, and more than 5000 terabytes of data downloaded.

The base station will provide 3G and 4G coverage for the Clarence Railway Station — the home of the iconic Zig Zag Railway — and the surrounding area for the first time.

It is unknown whether Gee exclaimed his own name at the development, nor whether his friends ask him if has anything to do with the forthcoming 5-"Gee" network, but he presumably geed himself up and stated the following: "The Mobile Black Spot Program is so important for our country communities.

"This new infrastructure will enable those living in regional areas to participate in the digital economy and conduct business, as well as access important education and health services across the country.

“It is delivering much needed new investment in mobile infrastructure across regional Australia to address mobile coverage issues.

“This mobile phone tower at Clarence represents one of 25 new towers being rolled out across the Calare electorate, and it’s fantastic to see that the program is reaching more and more communities across the country.”

He added: “Telstra has now provided new or improved mobile coverage for more than 55,000 homes and businesses across 4200 kilometres of road and around 160,000 square kilometres of the country through the Federal Government’s Mobile Black Spot Program.

“What is even more telling about the importance of this investment is the way these communities, which now have mobile coverage for the first time, are using it.

“Since we switched on our first base stations as part of this program in December 2015, there have now been in excess of 100 million calls carried and more than 5000 terabytes of data downloaded.

“That’s the equivalent of customers downloading more than a million HD movies or a billion songs,” which is no doubt music to the ears of presumably long-suffering residents and visitors to the area who now have a 21st century phone and data service at long last.

Telstra and both the Federal and NSW Governments report having contributed funding for the Clarence base station.

Penn pushed on, stating: “This base station will provide a new world of connectivity for the Clarence community and it will also support the many tourists who will be visiting the Zig Zag Railway once it is reopens to the public".

In what is good news for those still in black spot areas, Telstra reminds us that it is "building more than 650 new mobile base stations through the three rounds of the Federal Government’s Mobile Black Spot Program".

"That’s more than three times the commitment of all other carriers combined and represents a total Telstra investment of $260 million.

"In addition to more than 650 new mobile base stations, Telstra is continuing to install Black Spot Small Cells — with around 200 installed to date — delivering high-speed 4G data services in some small country towns where suitable Telstra infrastructure is available."

So, Telstra's promise of more coverage in more places keeps growing, as the black eyes of black spots get their lights punched out and lit up with connectivity, in what is a knockout blow of disconnecting the disconnected past, so you can finally dial up, log on and tune in to the brave new regional world where Androids, iPhones and their owners truly can dream of and download electric sheep.