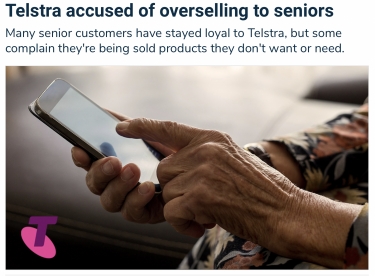 Many senior customers have stayed loyal to Telstra, but some complain they are being oversold products they don't want or need.

CHOICE.com.au's Jarni Blakkarly has written an in-depth feature that looks at Telstra over-selling services to seniors, which is reprinted below.

Telstra is Australia's largest telecommunications company, and for some senior citizens it holds a special place in the market that pre-dates privatisation and the introduction of competition in 1997.

A former Telstra staff member says some senior customers even still refer to the company as "Telecom" despite the name being changed in 1995.

Teresa Corbin, CEO of the Australian Communications Consumer Action Network, says there is a lot of brand loyalty to the company.

"Older customers do tend to be loyal to Telstra ... and people are reluctant to shop around," she said.

But we spoke to two people who say they were taken advantage of because of their age and they are frustrated with the company after being left to pay higher bills for products and services they didn't ask for.

Two former staff members of the company also describe a sales-focused culture with little regard for whether the products being sold are wanted or needed.

When Nicola Clement's father's health was declining mid last year, her mum called Telstra to transfer his account to her name. Telstra saw it as a sales opportunity.

Her mum, who is 68 years old, walked away from the call with what she thought were two free tablet devices.

It was only when her daughter checked on the bills after her dad passed away later that year that she discovered her parents had been signed up to a 36- month repayment plan for the devices. They would have to pay almost $300 per device to cancel.

"I feel that they have been taken advantage of in the worst possible way," Nicola told CHOICE.

"Dad's health was deteriorating badly and he was on quite strong medication. Dad was always the one who was more technologically savvy and he thought he was on to a great deal and mum went along with it," she said.

Nicola says her mum has been left widowed and paying for devices she doesn't want or need. One of them still sits in its box unopened.

'They played me up'

Nola Lehninger is 91 and only uses her landline. She says she sees no need for a mobile and bemoans seeing "young people" on the street with their headphones in, not watching where they're going.

But last year, on a sales call from Telstra, she was signed up to an internet plan which cost her an additional $15 a month, despite not using the internet at all or even owning a computer.

"They never mentioned that I would be paying more … they certainly played me up didn't they?" she told CHOICE.

After a carer of hers made multiple complaints to Telstra, the company agreed to lower her bill again and refund the money she had paid over 12 months. But the experience has left a bitter taste.

"Maybe they take advantage of someone who is very old like me," Nola said.

David (name changed by CHOICE), who worked for Telstra for over 15 years, until early 2021, describes the sales culture as highly competitive, with bonuses such as overseas trips for those with the highest annual sales. He worked in sales up until 2010.

"It all added towards your tally. They used to have a board on the side for each team. You had your products and your add ons, and they would track your tally each week and month," he said.

"I was pretty competitive, I always wanted to be top three so I kept track of that. There was always competition between the guys and teams," he added.

He says the salespeople received financial bonuses based on their performance, with the biggest commission going to those who sold higher cost products.

Another former staff member, James, who worked at Telstra around five years ago, said he was told off by management at the store he worked at in Melbourne for not upselling older customers a Telstra phone insurance plan that he felt they didn't need.

"It's all sales focused, it's not even about matching to needs or anything, it's all profit motive. I know it's a business, but it has a duty to its customers not to be doing some of these aggressive sales tactics," he said.

It's not the first time Telstra has been accused of overselling to vulnerable customers.

In November last year, the Australian Competition and Consumer Commission (ACCC) filed proceedings in the Federal Court, aiming to fine Telstra $50 million for "unconscionable conduct" over selling mobile phone plans to over 100 Indigenous consumers who did not understand and could not afford the plans.

The fine was for sales conduct between 2016 and 2018, well before the cases involving Nicola and Nola.

Telstra accepted the penalty and it is now up to the Federal Court to determine if the fine is adequate.

If approved by the court it would be the second-highest penalty ever imposed under Australian consumer law.

According to the ACCC investigation, Telstra board and senior executives were unaware of the improper sales tactics, but the company had no effective systems in place to detect or prevent the conduct.

Financial Counselling Australia (FCA) recently conducted a survey of financial counsellors, seeking feedback on how their clients have been affected by issues with telcos.

Mis-selling was a major theme of the report with at least 80% of financial counsellors reporting that mis-selling or overselling had contributed to their client's financial difficulties.

A third of counsellors estimate that these practices have impacted more than half of their clients (this was the highest answer on the survey).

FCA CEO Fiona Guthrie says the report highlights how widespread the problem is among customers of all ages.

Guthrie called on Telstra and the industry more broadly to do away with the commission-based structure in the same way the banking industry has been forced to. "This model is too fraught with danger," she said.

The Telecommunications Industry Ombudsman and the ACCC both told CHOICE they don't keep age-specific data on the complaints they receive.

Corbin says the power is in the hands of the salesperson when it comes to older customers.

"The person selling the device knows all the information and has a lot of power in that dynamic. It's really up to them to make an assessment of their needs and advise them of the best product," she said.

68 year old Leonie Barke says her local Telstra manager upsold her to an upgraded mobile package, which now costs her $175 a month. She was happy with her previous plan of $100 a month.

"I'm furious, it's too much for me, it's very expensive. I'm a pensioner and I don't get any other income in," she said.

She has since been told that she is on a 24-month plan and can't get out of it, something she says she wasn't told at the time of sale.

"I think he conned me into it. He was on a commission from it, and I think he saw me as a bit of a softy, which I'm not," she said.

David says during his time at Telstra the company has gone through a lot of changes, with the downsizing and offshoring of many elements of its operations, including sales.

His roles included working in the complaints department, where he saw problems. Sometimes when a customer complained, the offshore sales team wouldn't file a phone record of the sales call to analyse the interaction, as they were meant to.

In David's view, Telstra isn't meeting the needs of its elderly customers or properly responding to complaints about mis-selling when they arise.

"As far as the elderly are concerned, I think Telstra has stopped caring. It's a technology company and technology is moving forward and I don't think they have put things in place to make sure that part of their customer base is being kept in touch or being provided the assistance that they need," he said.

Despite the views of some of its former employees and current customers, a Telstra spokesperson told CHOICE the company takes the issue of over-selling seriously and is proud of the work they've done to support seniors.

"We have no tolerance for overselling or mis-selling, our model is strongly focussed on the needs of the customer," the spokesperson said.

"We have a balanced scorecard approach that takes into account customer outcomes, compliance, and sales results as part of the remuneration model for staff," they said.

Telstra wouldn't provide a breakdown of exactly what percentage of their scorecard approach sales results made up, but says they have made "significant changes in recent years" and that "customer experience results" contributed up to 40 percent of the payment outcomes for staff now.

In response to the ACCC action, Telstra said they had made significant changes, including their announcement in February that all franchise stores would end and be brought directly under Telstra.

Telstra previously had 270 franchise-owned stores around the country. The stores that were found to be overselling to Indigenous consumers by the ACCC were franchise stores and Telstra says bringing an end to the franchise arrangement will improve customer experiences.

"We take responsible selling extremely seriously and we don't shy away from the fact that we have made some mistakes previously," the spokesperson said.

More in this category: « New service provides visiting seafarers with free onboard Wi-Fi IDTechEx explores graphene for 6G communications »
Share News tips for the iTWire Journalists? Your tip will be anonymous