With OVO's data allowances at least doubling across most plans during 2018, its provocation of fellow mobile and data players to capture cunning customers has reached its highest count yet.

For the second time in less than six months, OVO has cranked up data allowances across its range of mobile plans which, in most cases, at least "doubles the data for no extra cost for new and existing OVO fans".

Indeed, I'd personally have to call the company an MVNOVO, but as we move towards the esoteric wordplay my mind is capable of, such as wanting to investigate the electronic field of ovonics, and further away from OVO's data deals, it's time to get on with it.

You see, Ovo is also adding a "new MiniPlus plan for tweens and teens, building on its ever-popular Mini plan incorporating free subscription to FamilyZone cyber safety features (worth $59.40 per year)".

"MiniPlus doubles the data allowance to 2GB per month with unlimited calls and texts for $14.95 per 30 days.

"Anyone who takes advantage of the changes before the end of January 2019 will get the new data limits and pricing permanently." 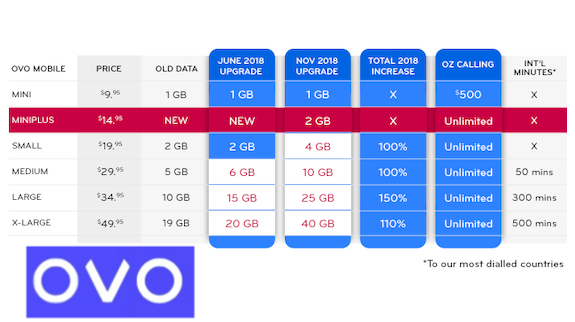 OVO notes that its "massive free-of-charge data hikes come at a time when 43% of Australians are regularly exceeding their data limits and dropping an extra $313 million per year to feed their data consumption habit".

"That's not surprising when you consider we're using nearly 50% more mobile data year-on-year according to latest ABS figures − which questions the logic of lock-in contracts and also shows how easy it is to be hit with big extra bills at the end of each month."

So, what does OVO founder and chief executive Matt Jones have to say on the topic?

He said: "It's times like this when it's very easy to see why prepaid mobile phone plans are the smart option in this country, particularly when the provider regularly delivers no-cost data package increases.

"OVO was set up to give mobile customers a fairer deal. No lock-in contracts, no complicated terms and conditions, and if there's a chance we can pass on a saving or offer extra benefits, we do it.

"Super-fast 4G mobile data is becoming cheaper. If your telco isn't continually passing these savings on, you're with the wrong telco."

We're also reminded that "in addition to extra data at no extra cost", these plans also offer OVO Time – data-free viewing of the tens of thousands of hours of unique content on OVOPlay including rugby, esports, soccer, drag racing, gymnastics, water polo, badminton and a variety of other entertainment. OVOPlay is also home to streamed radio from Triple M and HIT FM stations across the country.

More in this category: « Huawei and China Mobile unveil first 8K VR 5G broadcast at 5th World Internet Conference Optus half-year profits fall by a fifth due to NBN migration charges »
Share News tips for the iTWire Journalists? Your tip will be anonymous