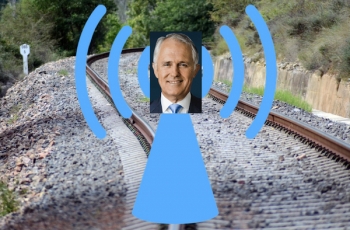 The Turnbull Coalition government is promising, if re-elected, "continuous mobile coverage on trains between the Central Coast and Hornsby, as well as Wi-Fi at each train station".

My first thought is that sadly, this obviously does NOT mean Wi-Fi continuously on the train, but "only" at stations. Continuous Wi-Fi would be the kind of agile and innovative thing you’d expect an agile and innovative re-elected prime minister to implement, but I guess that’s too expensive.

However, Wi-Fi at train stations is at least, better than nothing, as is the promise of actual, reliable cellular and mobile data coverage – I certainly have "enjoyed" the dreaded dropouts that occur on the Central Coast line when I go to visit friends living there. When you go through a couple of tunnels, and along what the Coalition says is "60 kilometres of track between Hornsby and Wyong" where there is little or no mobile data coverage.

Of course, what would impress me more is if the Coalition promised mobile coverage for the entire rail network, as is the case for our major highways, but perhaps we need to wait for a future election cycle (or several) to get such promises.

In any case, the Coalition is promising, that, if elected, it will "invest to upgrade and build telecommunications infrastructure to improve the lives of 30,000 Central Coast residents – one in four of the adult workforce – who commute long distances by train each day".

We are told that "there are more than 60 kilometres of rail between Wyong and Hornsby where commuters face little or no mobile data coverage" and that "the Coalition will invest $12 million to provide continuous in-train mobile coverage along this corridor, as well as Wi-Fi at each train station".

Prime Minister Malcolm Turnbull said: “This will improve the lives of thousands of Central Coast residents who leave home before dawn each day and return after dark.

“And it’s happening because local members Karen McNamara and Lucy Wicks — after spending hundreds of hours talking to commuters — told me this was one of the most practical things we could do for families on the Central Coast.” 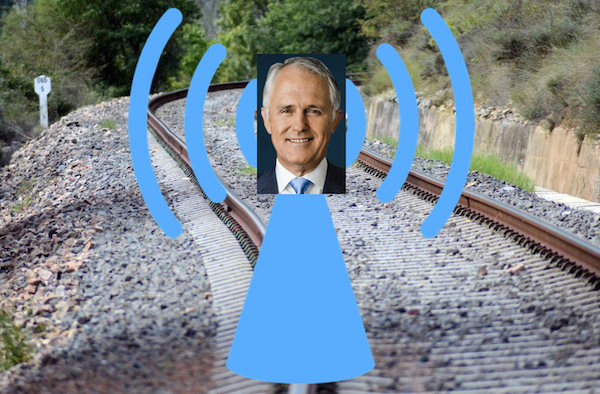 Communications Minister Mitch Fifield popped in to make sure he was represented, and said the Coalition "understands that reliable mobile coverage is crucial for productivity".

He added that: “The Coalition understands the importance of reliable mobile coverage so commuters can get work done and stay in touch with family or the office.”

Of course, this wouldn’t be a major announcement without all of the locally affected members popping in for a say, so we also get to hear from the Member for Robertson, Lucy Wicks, who said this commitment "is a game-changer which will directly benefit thousands of people every day".

Wicks said: “This is a major, innovative commitment from the Turnbull government which will mean more of our hard-working commuters can stay connected for longer on the daily commute, which can be a 4- to 5-hour round trip to Sydney or Newcastle.”

And as noted, everyone needs to be heard so they will hopefully get a vote from the public, so the genuinely excellent Member for Dobell, Karen McNamara, (who replaced the infamous Craig Thomson), also made an appearance in this media release to say that: “Better mobile connectivity on trains and Wi-Fi at train stations between the Central Coast and Sydney can seem like such a simple solution but it will make a big difference to so many people.”

The promised "$12 million commitment is expected to leverage an additional $4 million investment from the NSW government" and we are told that "there will be an expression of interest process for mobile network providers to bid for the funding".

We are also promised that "a re-elected Turnbull Coalition will work with the NSW government to provide in-kind assistance to deliver the Wi-Fi and improved mobile coverage, facilitating access to land along the rail corridor and helping facilitate planning approvals for new infrastructure.’

NSW Minister for Transport and Infrastructure Andrew Constance said: “A lack of mobile coverage is one of the greatest frustrations for customers on the Central Coast, so this investment will make a huge difference, keeping them connected on the go.”

This new project will build on the success of the Coalition’s $220 million Mobile Black Spot Programme which is already fixing thousands of mobile black spots around the country, and of course the media release ends with the statement that "the Coalition is investing in infrastructure and delivering jobs and growth for the Central Coast".

To find out the answer to this question, the Coalition wants your vote, but we can only hope that, if re-elected, this promise is fulfilled before the next election cycle starts and promises start flying anew, again.

More in this category: « Genesis: let there be gigabit backhaul speeds and 400Mbps access broadband over copper Not 4Gotten: five more Vodafone MVNOs finally go 4G »
Share News tips for the iTWire Journalists? Your tip will be anonymous