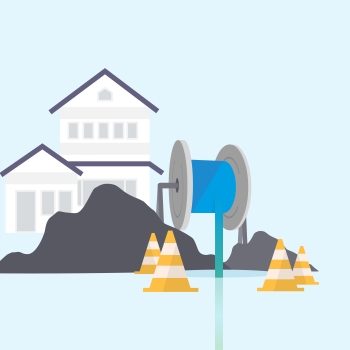 NBN Co says 2017 will be the biggest year for the National Broadband Network, with almost 50% of the network rollout completed by the end of June. But, it won't be all plain sailing, with the company flagging some disruption as the rollout expands to high density metro areas for the first time.

NBN Co has set a target of a total footprint of 5.4 million homes and businesses to be connected to the NBN by 30 June, with 277,000 homes added to the footprint by the end of last month alone.

According to NBN Co chief executive Bill Morrow, the number of people able to connect will expand to nine million homes by June 2018, with the end of the rollout in sight.

Morrow says the next 12 months will be significant in terms of scale for both the number of people who can access the NBN network and the number of paying customers.

To date more than 70% of the NBN rollout has happened in regional and rural areas, but this year will see more construction commence in metropolitan areas along with continued work right across the country.

“Midway through the year, half the NBN network will be completed. This will be a significant turning point as we aim to finish the build by 2020 and become the first fully-connected continent in the world.

“We have developed strong foundations, processes and systems, and this year we will be opening up the NBN network to new regions, including many metro areas for the first time.

“The intensified deployment will present challenges but the NBN team, along with our partners and retailers, is focused on a positive experience for customers and end users as we accelerate the build and connection rates to new records.”

Morrow outlined what he says is the complexity of connecting the entire continent,  stressing that, with the rapid pace of the build, NBN faces the additional challenge this year of deploying the network into the higher density metro-areas where access to pits and existing infrastructure becomes more difficult.

“This may mean disruption from civil works, visible for the first time in cities,” he says.

Morrow cautions that, as the NBN network rolls out into cities, the company will be met with new problems to solve.

“We understand there will be some disruption for residents and business owners as the 14,000 people working across NBN, and our delivery partners, complete the task as soon as possible.

“The payoff will be worth it, with universal connectivity delivering health, commerce, education and lifestyle benefits to all Australians.”

Morrow outlined some of the metropolitan areas where construction will begin or switch on this year including: