NBN reckoning coming? Aussie Broadband is the latest to warn the NBN needs to rebalance its pricing Featured 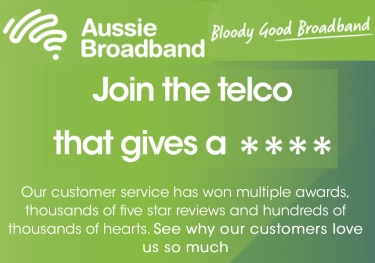 Even with the NBN Co as a government entity in public hands (at least for now), the companies that retail the nbn service are faced with artificially limited capacity and pricing constraints while selling an unlimited product to consumers, leading to six month introductory deals that then raise the price afterwards - and it’s no surprise to see Internet providers and end-users still complaining about the NBN alike.

Aussie Broadband’s Managing Director Phillip Britt has warned the industry needs a rapid rebalance in NBN’s wholesale pricing to avoid uncertainty over the next two years.

It follows strong advice from Telstra to NBN Co to reduce the costs and complexity to providers and consumers.

My observation is that rather than NBN Co undertaking a radical simplification pricing structure for the NBN Co per effective industry demands, and as happened in other countries, the NBN Co keeps needing to introduce special deals because they just won’t do the right thing and fix the pricing situation once and for all, per industry suggestion.

The high prices are obviously earning NBN Co more than enough money and profit from everyday Australian users that it can afford to pay tens of millions in bonuses to people that are supposed to already be paid to do their job.

So, the strong statement from Aussie Broadband MD Phil Britt below isn’t his first such statement, but instead the newest, following the changes NBN Co made earlier this year for providers to offer new deals to customers, with Telstra not the only other provider to have and express similar views.

Britt believes plan prices or customer experience will be impacted if a bridging solution is not found.

“We welcome and are encouraged by the ACCC’s recently announcement about taking a blank sheet approach to NBN’s pricing structure, and the consultation process that’s been announced,” said Phil.

“However, it’s likely that this process will take at least two years, and we believe significant damage to the industry’s reputation and/or retail price rises may happen in the meantime.

Presenting at the CommsDay Summit in Sydney, Phil described the recently released “soft cap” model from NBN as useless for at least half of its 12 month timeline, and said NBN “released this model recently in response to ongoing RSP criticism of the current wholesale pricing structure.”

Phil also said that “a clause in the soft cap program relating to rebates, and the impact of CVC provisioning rebates last year, makes the cap useless for internet service providers until at least May 2022.

“There is no disputing that consumers’ use of data continues to increase year-on-year, with industry figures showing between 20 and 30%.

“In most things telco, prices either go down or included value goes up over time.

“For example, in the last 3 years we’ve seen backhaul prices go from 15 down to 5 cents per Mbps on common routes, and in retail circles customers have seen significantly increased included value on mobile plans.

“Yet in NBN’s pricing model for CVC, if data usage goes up by 20%, the cost to retail service providers doubles,” Phil continued.

In addition, Phil presented modelling that proposed that “even with the proposed soft cap, gross margin for providers would decline by 7.1% over the next 24 months.“

His view is that this will result in either increased plan prices for customers, or reduced quality of service as providers seek to reduce their overage costs.

“What we really need is a bridge,” he said.

“Whilst the current NBN pricing consultation tries to provide protection to RSPs from sudden increases in usage, it still assumes regular growth in usage and nbn’s ARPU.”

Phil said the NBN pricing model was originally designed to provide a smooth transition from ADSL into NBN, so the access price (AVC) was lowered.

“Over time it was intended that NBN would make up for this lower access charge within the usage component (CVC).

“We believe the immediate solution is to rebalance the access price to where it needs to be, removing the need for the usage component. Future usage increases can be offset in operational savings.

“We know that NBN can do this – it is essentially the way it is operating its enterprise ethernet service for businesses.

“A redesign like this will give the industry breathing space to deliver good service and plans based on solid pricing, not shifting and complex sands, until the ACCC review is complete.”

Aussie Broadband is certainly putting its money where its mouth is, and has grown to become Australia’s fifth largest NBN service provider with over 370,000 residential and business customers.

This is because Phil is, and has positioned Aussie Broadband as, a “challenger Internet service provider.”

With the company’s new mobile plans offering coverage on the wholesale Optus 5G and 4G/3G networks across Australia, along with new plans that have nearly doubled the data, it is doing its best to become a challenger mobile virtual network operator (MVNO), too - with the company switching from Telstra to Optus earlier this year in another shake-up, too.

With its own fibre network well under construction, Aussie Broadband has proven itself to definitely be a contender, under the leadership of Phil Britt and his talented team.

If you haven’t already seen it, or are curious to watch again, here’s my video interview article with Phil Britt from last year after Phil and his team successfully launched Aussie Broadband onto the ASX, raising $40m.

More in this category: « TPG Telecom delivers AGM, Chairman's address, CEO and MD address to ASX NBN Co reports rise in revenue for first nine months, no change in ARPU »
Share News tips for the iTWire Journalists? Your tip will be anonymous