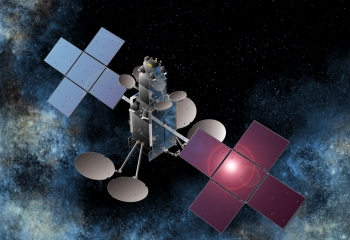 NBN Co’s two planned satellites are one aspect of Labor’s NBN that appear untouchable under the new strategic direction. Indeed, there may even be a third.

NBN Co is considering launching a third satellite into orbit to help serve Australia's rural communities, with a review into the company's satellite operations set to be handed down shortly.

There are currently two NBN satellites planned for launch next year, designed to serve rural and remote broadband needs. The two satellites, tentatively named 1A and 1B, are being constructed in the US as part of a $620 million contract with Space Systems Loral, and are launched by Arianespace from French Guiana, on the north Atlantic coast of South America, next year.

The satellites will be able to provide 200,000 remote Australian homes and businesses with up to 25Mbps download speeds, while the rest of the country will be connected to the NBN with a mix of fibre, copper and HFC (hybrid fibre-coaxial) technologies.

Sources “close to the NBN” told The Australian Financial Review that a review into the fixed wireless and satellite elements of the $41 billion infrastructure project, to be released before the end of the month, will recommend further consideration of a wholly new satellite to be built and launched at some time in the next decade.

NBN Co is under heavy pressure to connect as many Australians to high-speed broadband as quickly as possible, with the Coalition government already announcing it will break a key election promise of promising all Australians access to 25 Mbps download speeds by 2016.

New NBN Co chief executive Bill Morrow announced last week that the first of the two satellites was 70% complete and on track for delivery, though internal dialogue at NBN Co has been fuelled by ongoing uncertainty about whether the satellites will be sufficient to meet demand.

Internal NBN Co corporate plans suggested the two satellites should be able to cover 580,000 homes and businesses by the end of the decade but December's strategic review revised that figure down to 206,000 by 2020.

“Customers are taking up fixed wireless and satellite faster than planned,” December's review said. “Under a 'business as usual' model, NBN Co will need to add another 800 base stations and possibly an additional satellite if current levels of demand continue, contributing to the increased cost described.”

The plan is contrary to what Communications Minister Malcolm Turnbull said in 2012 when he was in opposition, when he argued that NBN Co simply didn't need extra satellites. “There is enough capacity on private satellites already in orbit or scheduled for launch for the NBN to deliver broadband to the 200,000 or so premises in remote Australia without building its own,” Turnbull said in February 2012.

The company's financial struggles may not only hamper plans to operate a third satellite, but it also may cut costs through selling assets like cell towers, or by operating services like call centres offshore.

”You will see a tighter focus on efficiency and delivery,” Morrow said. “This is somebody else’s money and I look at it that way, therefore we need to treat it with a degree of frugality.

“I have a long list of operational reviews that will take a number of weeks to get through. I may conclude there are other areas where we can be more efficient, by doing stuff out of the box.”

The NBN satellites did not receive a lot of attention leading up to the election, when the focus was largely on FTTP vs FTTN, but after he left NBN Co former CEO Mike Quigley said that he believed that the setting in place of the NBN satellite services was one of his, and the company’s, major achievements.

At a talk at a TelSoc function in December Quigley said he was especially proud of the work the company did in planning and implementing the NBN satellite system, and scathing of its critics. “Some people said we could lease space on existing satellites. We had to do that for the interim, and we quickly ran out of space.

“Our own satellites will give us ten times that capacity and much higher speed. It is an enduring legacy for Australia’s remote regions. But even today people are still criticising it.” Quigley told iTWire after his talk that he did not believe the process could now be reversed.

More in this category: « Secret nbn trial slashes per-premises costs in half Build it in fibre – ‘Just do it.'' »
Share News tips for the iTWire Journalists? Your tip will be anonymous