NBN Co’s latest list of suburbs and towns where 900,000 more homes are eligible for a fibre upgrade by ordering selected plans 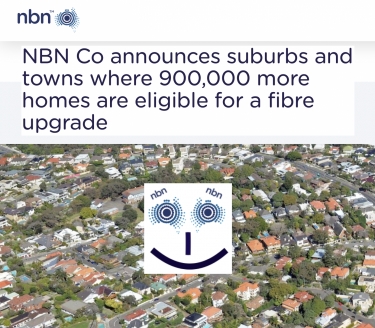 The ACT, NT and Tasmania finally join the list where suburbs will be upgrade to a fibre connection, with 1.1 million homes now announced and 2 million homes to be passed by 2023, leading to a total of 3.5 million premises to be able to access the nbn Home Ultrafast wholesale speed tier with download speeds of 500 Mbps to close to 1 Gbps.

NBN Co today revealed the latest list of suburbs and towns around Australia where an additional 900,000 homes and businesses are set to benefit from the extension of fibre deeper into communities, enabling access to the wholesale download speed tier of close to 1 Gbps on demand by 2023 if they order plans based on eligible wholesale speed tiers.

The announcement provides details of the first suburbs and towns in Tasmania, the ACT and Northern Territory that are currently served by Fibre to the Node (FTTN) where certain premises will progressively become eligible for Fibre to the Premises (FTTP) upgrades.

The Fibre to the Node (FTTN) to Fibre to the Premises (FTTP) network upgrade program alone aims to enable up to 2 million premises to access the wholesale download speed tier of close to 1 Gbps Home Ultrafast (FTTP) on demand. NBN Co says it will make further announcements later this year on additional suburbs and towns that will be incorporated into the FTTN to FTTP upgrade program.

It is part of the company’s wider $3.5 billion network investment program, which aims to make nbn’s highest wholesale speed tiers available, as demand arises, to around 8 million premises or up to 75% of homes and businesses on the fixed line network by 2023.

Following the completion of detailed design and construction activity for the FTTN to FTTP network upgrade program, which is currently underway, the company expects to initiate a small scale launch that will enable the first customers to place orders with internet retailers for fibre lead-ins and higher speed services in some eligible areas from November 2021.

The company is also planning to commence similar full fibre upgrades to be made available on demand to eligible customers living or working in premises currently served by Fibre to the Curb (FTTC).

NBN Co is currently engaged in consultation with internet retailers to define the process by which customers living in eligible premises currently served by FTTN or FTTC will be informed that their premises is eligible to receive higher speed services.

NBN Co is planning to update the functionality of its ‘Check your address’ tool on the nbnco.com.au home page by November 2021, which will enable customers to check if their premises may be eligible for the FTTP upgrade, which would enable them to order nbn Home Fast, nbn Home Superfast or nbn Home Ultrafast wholesale speed tiers from their chosen internet retailer.

As part of its second consultation paper on the network upgrades, released to internet retailers today, NBN Co has proposed that customers living or working in premises currently served by FTTN, that cannot currently receive access to the higher speed tiers, will need to order a plan based on wholesale speed tiers of 100/20 Mbps or higher4 to qualify for a full fibre upgrade.

Once the program to extend fibre deeper into select parts of individual communities is complete, eligible customers will be able to order a higher speed service via their chosen internet retailer. Once approved, this will trigger the construction of a fibre lead-in to eligible premises, completing their conversion from FTTN to FTTP.

Due to the faster current capabilities of FTTC, in its consultation paper to industry, NBN Co has proposed that customers living or working in premises currently served by this technology will need to order a plan based on wholesale speed tiers of 250/25 Mbps or higher to qualify for a full fibre upgrade.

NBN Co’s area selection criteria for the FTTN to FTTP upgrade program is based on areas where the company anticipates strong demand for higher speeds; where it can deploy with speed and agility; where it can provide maximum benefit to the most customers, and where its multi-billion dollar investment is most likely to spread and multiply economic activity across the nation.

By 31 December 2021, the company is forecasting that approximately 94% or approximately 2.35 million premises that are ready to connect to the nbn network via HFC will be able to access the nbn Home Ultrafast wholesale speed tier.

Stephen Rue, CEO at NBN Co, said: “We’re very pleased to announce the latest list of suburbs and towns across Australia – from Byron Bay on the eastern tip of New South Wales to Yokine in Western Australia – that will ultimately see around 2 million FTTN premises become eligible to join our ever-expanding Fibre to the Premises footprint, on demand.

“We very deliberately rolled out the National Broadband Network at pace across Australia using a range of technologies to ensure we could provide access to high speed broadband services across Australia as quickly as possible.

“We are now well underway with the next long-planned phase of the network’s evolution and development to provide more customers with access to nbn’s highest wholesale speed tiers currently available. Today, approximately 3.5 million premises across Australia can access the nbn Home Ultrafast wholesale speed tier with wholesale download speeds of 500 Mbps to close to 1 Gbps, on demand.

“We are on track to achieve our goal of enabling around 8 million premises or up to 75% of homes and businesses on the fixed line network to access nbn’s highest wholesale speed tiers, if they so choose, by 2023.”

The fibre extensions announced today includes eligible premises in parts of the following towns and suburbs:

More in this category: « GlobalData: Investment in 5G to drive South Korea’s mobile services market over 2020-2025 Space startup Quasar takes off with CSIRO tech »
Share News tips for the iTWire Journalists? Your tip will be anonymous