Labor's NBN is no more Featured 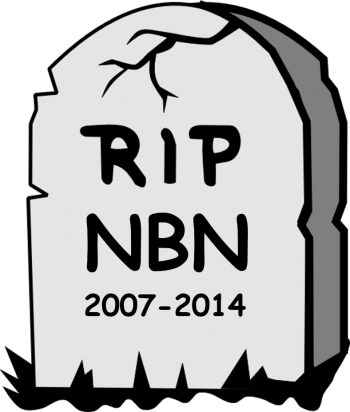 Labor’s NBN – the idea of a publicly owned and funded, all fibre, wholesale broadband network, is now officially dead.

It has been ill for some time, and recently terminally so, but now the high priests of the competitive market have pronounced the last rites. The new NBN has not only new (well, old actually) technologies, but a new regulatory regime that will see competition introduced and prices raised. Building a new house or buying one just built? You will have to pay.

The Government has announced the biggest changes to telecommunications regulations since the NBN was announced, with major changes to broadband policy. Communications Minister Malcolm Turnbull and Finance Minister Matthias Cormann have released a new policy document which they say “sets out a roadmap for reform in the telecommunications sector which will see several restrictive aspects of existing market regulation gradually replaced with more competition-friendly settings.”

The document sets a radically different course for the NBN. It outlines a number of proposed reforms based on the Government's response to the 53 recommendations for regulatory changes proposed earlier this year following a review carried out by an independent panel of experts chaired by Dr Michael Vertigan. The paper is here.

Turnbull and Cormann, in a joint statement, said the reforms will “encourage a more competitive, responsive telecommunications market complement the Government's goal of completing the NBN as quickly as possible to ensure all Australians have access to affordable high-speed broadband.”

It does that by radically altering the role of the NBN, by allowing competition to it (what might be called the ‘TPG clause’), by charging developers to put the NBN into greenfields sites (so that private networks can compete), and removing the requirement for uniform national pricing.

There’s more to it, but each of these key changes means the new NBN will be very different  from the universal public network originally proposed by Labor – quite apart from the move from an all fibre network to the ‘multi-technology mix’ of fibre, HFC and copper.

The policy paper proposes a phased implementation of what it calls “more competitively neutral regulation, ensuring it is introduced in a way which does not delay or derail the NBN.” It is presented as a proposal, and the Government will take ‘comments’ rather than submissions on those proposals, but is allowing only a month for them, over the Christmas break. Do not expect any significant deviations from the roadmap.

The policy paper says the Government believes regulation of the telecommunications market should be consistent with three overarching principles:

The policy paper says the Government will implement the following reforms:

In a major departure from previous policy, the paper says the NBN Co's current uniform national wholesale price structure will be replaced with a system of price caps, “which will ensure the price of the NBN cannot rise in either urban or regional areas but NBN Co can respond to competition,” which doesn’t quite seem to make sense, unless it means NBN Co can lower but not raise prices.

The Bureau of Communications Research, an economic and statistical research unit within the Department of Communications which the Government says is ‘independent’, will assess NBN Co's internal cross-subsidies and recommend a model for replacing them with a more competitively neutral contribution mechanism to fund the NBN in uncommercial areas. Why not ACMA, which we all know actually is independent?

“NBN Co's business units operating different technologies will be required to have separate accounts and (subject to review) IT systems to ensure future governments have policy and financial flexibility.” Privatisation, anyone?

“Overall, the approach set out in the policy paper provides increased certainty for an industry that has been undergoing regulatory change since the original NBN was announced in 2007.”

Increased certainty is something that everybody will agree the NBN could use. Whether this is the kind of certainty many of them want is another matter.

More in this category: « Optus seals 7-year managed services deal with Suncorp Fusion boosts business broadband by bonding »
Share News tips for the iTWire Journalists? Your tip will be anonymous