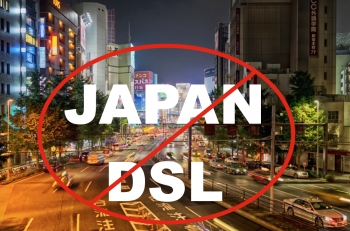 The latest analyst note on Japan from telecommunications analysis and research company BuddeCom says Japan is move to ‘close down DSL in favour of FttH.’

The details are contained in an 87-page report entitled ‘Japan - Telecoms, Mobile and Broadband’ that the company is selling to relevant parties at US $895 a pop.

The analyst note explains that Japan has ‘one of the most advanced telecommunications markets in the world,’ something it has had for some time.

Now comes the news that FttH is making up ‘an increasing proportion of the fixed broadband market at the expense of DSL,’ which is leading to operators planning a DSL network shutdown.

Part of the reason is stiff competition from wired and wireless competitors, including cable and FttH.

Naturally, the report notes both Japan and South Korea being ‘far ahead of the game relative to the other countries of the world’, with the mix of factors making this possible including ‘market readiness, consumption craziness, tech savviness, huge amounts of money, government intervention and broadband and telecom service providers willing to make the jump into the FttH market to be more competitive and gain market share, even if the cost per home passed did not work out to be a sound economic model over the short term.’

Not mentioned here is the smaller surface area of Japan and South Korea compared to the massive country that is Australia, but even so, Japan’s ‘broadband leadership’ will make ‘the next wave of web applications’ happen with ease.

Key developments detailed in the report include: 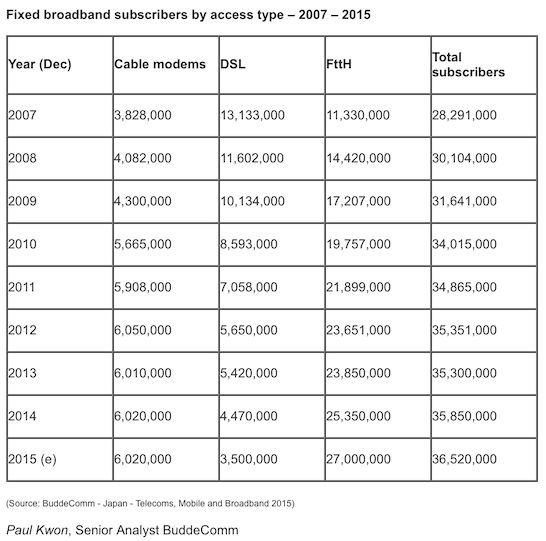 More in this category: « Mobile World Congress Shanghai 2015 starts today thru 17 July Our wireless is the best, says NBN »
Share News tips for the iTWire Journalists? Your tip will be anonymous