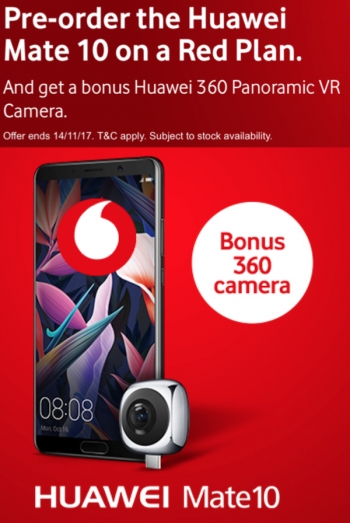 Seeking to checkmate its rivals, those who pre-order Huawei's Mate 10 before 14 November in Australia will also get a bonus 360 Panoramic VR Camera worth $179.

There's no sign yet of the Huawei Mate 10 Pro, but the equally powerful Huawei Mate 10, which has the traditional fingerprint reader on the front, the Kirin 970 AI-powered ARM processor, the advanced dual-camera system and more is now availabl for pre-order at Vodafone.

You're able to pre-order it today from Vodafone here on a range of plans and payment options.

Huawei posted a highlights video of the keynote announcements, and that is embedded at the end of this article.

The pre-order availability announcement comes a day before the iPhone X officially becomes available at retail, highlighting the intense competition in 2017 between Apple and all of its Android-based competitors, from Huawei to Google, from Samsung to LG, from Motorola to Oppo and everyone else in between.

As noted above, those who choose to pre-order with Vodafone before the 14th of November will also get a bonus Huawei 360 Panoramic VR Camera worth $179. 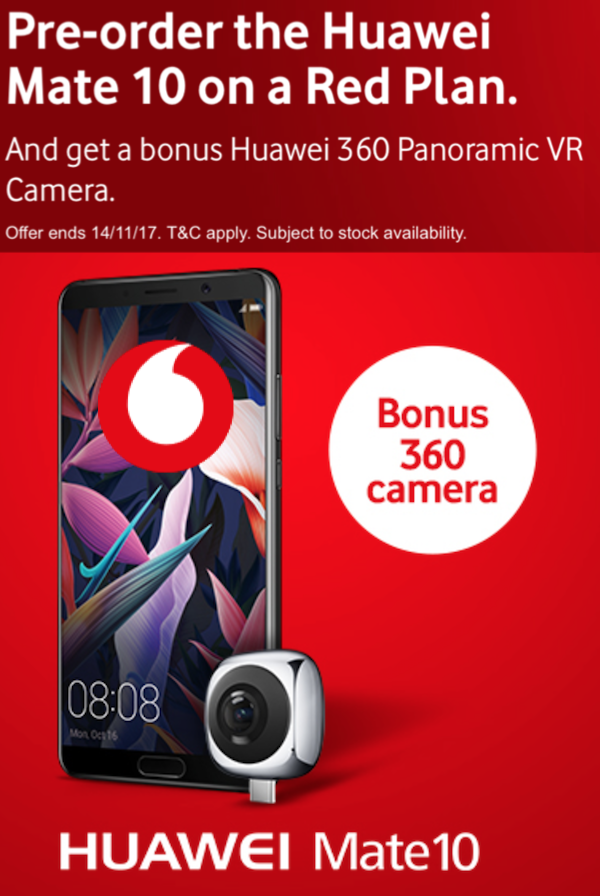 Huawei notes its 360 Panoramic VR camera "has dual 13MP lens cameras in a back to back configuration to deliver 360 photos and video as well as VR".

"Supporting Panorama, GIF, Fisheye, Planet and VR modes, the camera is extremely portable weighing only 30 grams and slots into any smartphone with a USB Type C port. The camera also draws power from the device it is plugged into, removing the need to recharge the device separately."

Key features of the Mate 10 are as follows:

Big Screen
5.9”, 2K LCD screen in 16 x 9 format. The brightness has been pushed to 730 nits to increase readability in bright daylight conditions.

Power
The Mate 10 has a class leading 4000 mAh battery and the world’s first safety-certified fast-charge systems (TUV Rheinland). The fast charge is one of the fastest available, capable of delivering 58% battery charge in 30mins – which should get you through a full day (depending on usage). Cable and SuperCharger come included in the box.

Artificial Intelligence
The Huawei Mate 10 is powered by the Kirin 970, the world’s first smartphone chipset with a neural processing unit (with artificial intelligence) built into the system architecture. But what does that mean for the consumer? AI will drive better all round CPU/GPU performance, power efficiency and performance over time (lifespan) but it also enables features such as the camera assistant – which through scene recognition can adjust camera settings or advanced AR applications such as the bespoke Microsoft translator.