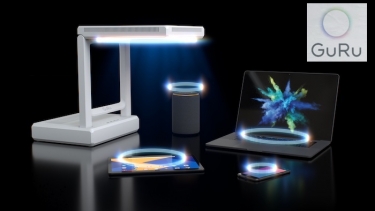 Since 2015, I’ve heard promises of over-the-air wireless technology, with Ossia, Energous, Xiaomi and Motorola among the companies who have already announced a lot of work in this area, and now Motorola has made a second announcement with GuRu Wireless.

GuRu Wireless. The company is actively working to create the future, one where devices are charged wirelessly over-the-air, just as Wi-Fi internet is delivered to devices today.

Of course, such a future where radical battery redesigns are possible is yet to come, but a future where existing devices could have their batteries charged wirelessly - rather than needing to be placed onto a magnetic induction charging pad - is hopefully going to arrive before the middle of this decade, if GuRu Wireless has anything to do with it.

The company says it is a global leader in customisable, over-the-air power solutions” and with Motorola, both are “announcing efforts to bring over-the-air wireless power to its smartphones.

Motorola says its track record of transformative innovation gives it an unprecedented ability to develop the first smartphones to power over-the-air at a meter, leveraging GuRu’s innovative technology.

“At Motorola we are constantly working to bring innovations to the market that can improve our consumers' lives. With this solution we will provide a glimpse of the freedom and flexibility that users can enjoy with a revolutionary over-the-air, wireless power technology,” said Dan Dery, VP of Product at Motorola.

“With GuRu, we imagine a new generation of wirelessly powered devices.”

Here is the official GuRu Wireless video, after which the article continues:

So, what is some more detail on GuRu’s technology - and what are the answers to the questions I sent the company? Details below.

GuRu says its patented, miniature modules will enable devices to be powered at long range by precision power transfer, and that both companies will work together to match Motorola's rigorous requirements of quality, power efficiency and safety.

We’re also told “a miniature-sized power transfer system delivers power at an unprecedented distance efficiently and with precision. GuRu’s wireless solution can be used as a charging hub or a power source in many settings where access to an energy source is needed.

“It is easy to install, safe, and sophisticated enough to find and adjust for various power levels to sync with the needs of any device. Even during use, it continuously charges devices and as a safety measure, reroutes power as necessary. Founded in 2017 by a team of scientists and engineers from Caltech, GuRu aims to ensure access to power be as ubiquitous as WiFi.”

What are the questions that I asked the company?

My first questions:
When will the technology be on sale?

Answer:
We are working towards commercialisation. There is no target date yet, but I would expect it to be available three years from now.

Question 2:
Will it be on sale to enterprises only to start with, or can I go into a Best Buy, Officeworks, JB HiFi, AT&T, Telstra or other store and buy a new Motorola phone with a GuRu wireless charger?

Answer:
If and when this technology becomes available, it would be sold in stores.

Question 3:
How long before it is available at retail, and how much does it cost?

Answer:
See the answer to the second question. There are no firm price targets yet, but it would be priced at retail levels.

Question 4:
How many watts is the charging, is it a slow charge or a fast charge? How long does it take to charge a phone's battery?

Answer:
The technology can generally charge a phone at regular speeds, i.e. 2-4 hours to full charge.

Question 4:
How close to the charging station do I have to be?

Answer:
The phone can be located almost anywhere within a couple of feet for a desk-type charger.

Question 5:
Does a human body or the couch I could be sitting on interfere with the signal?

Answer: Human tissue absorbs the signal. The system works around human bodies when possible, otherwise, it will stop charging.

Florian Bohn, CEO and co-founder of GuRu said: “Innovation has always been part of Motorola’s DNA. The company has long enriched our lives with its ecosystem of smart devices and solutions.

“We are excited to join forces with an industry leader whose goal is to improve the consumer experience. Together, we will introduce true mobility for portable smart devices and IoT sensors.”

My 2015 video interview with the then-COO of Ossia, Abid Hussain, can be seen here in an article titled: "VIDEO Interview: Welcome to the age of Ossia's true wireless charging."

You can also read my February 1, 2021 article on Xiaomi and Motorola's competing wireless charging technologies, titled: "Over the air charging delivers power like it's Wi-Fi, but when can you buy it?"

I certainly hope Guru’s estimate of three years before the technology is available to purchase in stores is realistic, and that this decade will see the dream of widely available wireless power come true at last.