Govt's fibre flip welcomed, but experts differ on what it will achieve Featured 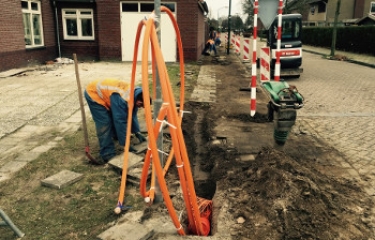 The Coalition Government's decision to provide fibre connections to about 75% of homes on the NBN, making a total of eight million in all by the end of 2023, has been welcomed by tech experts, but there have been some reservations about what the policy would actually achieve.

Mark Gregory, an Associate Professor in the School of Engineering at RMIT University, said the move was a positive step, but it appeared to entrench a digital divide by requiring consumers to commit to an expensive high speed plan before the upgrade occurred.

"For many Australians the NBN is already too expensive, it is about 20% more expensive than it should be due to the cost blowouts related to the Coalition Government's decision to roll out obsolete copper-based technologies," Gregory told iTWire when asked for his reaction..

"The government should commit to providing FttP to 93% of Australian premises and not have hurdles that disadvantage low income families. The low interest rates mean that it is sensible to upgrade infrastructure now. The COVID-19 pandemic has highlighted that telecommunications is an essential service for all Australians, irrespective of where they live and work, and it is vital that the government understand this and take appropriate action to provide fibre to the 93% of premises in the fixed NBN footprint."

He added that the announcement by Communications Minister Paul Fletcher appeared to be a bid to boost NBN Co's bottom line at a time when it is increasingly under threat from 5G fixed wireless.

"NBN Co has struggled to become cash-flow positive even though it has more than 7.4 million connections," Gregory pointed out. "Revenue continues to be hampered by the failure to boost ARPU to $53 per month or higher. The unreliable, congested, under-performing copper-based products on offer from NBN Co are a drag on revenue and the announcement appears to be an ill-conceived effort to convince Australians to move to over-priced congested higher speed plans."

Robin Eckermann, an adjunct professor at Canberra University and one of the people behind the TransACT network, said the announcement left room for uncertainty as to exactly what would be delivered.

"There's seems to be a lot of jubilation amongst folk who believe 75% of homes will be upgraded to FttP, but that would cost many more billions than are suggested in this program," he said. "My reading suggests that optical fibre will be pushed closer to end users so that 'technology choice' upgrades can be made with lower and more predictable costs – a good thing for those who need and are prepared to pay for superfast speeds.

"An investment in pushing optical fibre closer to the user is, of course, welcome — it's the right long-term direction — and a program that generates employment is going to help on the long road to economic recovery from the impacts of COVID-19. It also strengthens the foundation on which future network upgrades can be based."

But Eckermann said unless the costs of accessing higher speeds that relied on fibre-rich connections were affordable, the upgrade program would be of little immediate benefit to most Australians.

"The evidence is clear and indisputable that pricing is a major barrier to many users taking advantage of the speeds already available to them," he said. "Pricing really needs to be addressed in order to unlock the full benefits of advanced broadband for Australia.

"Already the value of improved broadband (as delivered to most Australians through the NBN) has been demonstrated during the COVID-19 crisis. I think it is mischievous (at best!) for the critics of the NBN multi-technology mix to construe these next upgrades as a backflip or admission of failure.

"Knowing from first-hand experience the costs and complexities involved in taking any new cabling into individual homes, I believe that the original FttP93 plan would have seen many premises still waiting to get to the NBN at the start of 2020 — costs would have been billions higher — and many Australians would have found themselves in a much worse position at the start of 2020 to cope with social isolation imperatives."

Rod Tucker, Laureate Emeritus Professor at the University of Melbourne and a member of Labor's Expert Panel that advised on the NBN, said: "For seven years, Communications Minister Paul Fletcher and his predecessors Mitch Fifield and Malcolm Turnbull tried to convince us that there is no need for FttP in Australia. Consultants were hired and studies done by the Coalition Government to show that Australians do not need or want download speeds above 50Mbps. And, despite mounting evidence to the contrary, all three ministers doggedly insisted that it cost much more to build an FttP network than an FttN network."

He said Wednesday's announcement of "a so-called upgrade of the NBN" showed that the government had finally admitted it was wrong on both counts.

"It also shows that they have finally accepted that the FttN network has not performed as well as they expected, with many FttN customers unable to achieve download speeds at the nominal threshold level of 25Mbps and many unable to get 50Mbps. The government has also realised that FttN is not going to pull Australia out of its abysmal position in Ookla’s global broadband speed rankings, where we currently sit 61st."

Tucker said the underlying motivation for the policy U-turn probably had more to do with the government's concerns around competition from 5G.

"Optus is already offering attractive alternative 5G services in some limited areas, and other telcos will soon follow suit. 5G has the potential to undermine the FttN business model and greatly reduce the resale value of the NBN," he opined.

"It is certainly good news that the government has decided to roll out more FttP. But the path they have followed now involves a bizarre strategy to over-build half of the FttN footprint of the NBN with a parallel FttP NBN running down every street. The spin from the government tells us that this is an upgrade. But if it looks, costs, and smells like a parallel network, it probably is a parallel network. A second NBN."

Gary McLaren, former chief technology officer of NBN Co, said it was a good sign that Fletcher had pushed the NBN Co in this direction.

"It is a big change from the previous position taken by Fifield who was on the record as saying just two years ago that 98% of Australian households would be OK with 50Mbps out until 2026. More Australian households and businesses will be able to get higher speeds thanks to the investment in more fibre deeper into the network," he said.

"However, it is clear that the price of these higher speed services will be very high. Currently, 1Gbps services are retailing for $149/month which will limit the demand considerably. NBN Co appears to realise this in the Corporate Plan and is expecting the number of households with Brownfields FttP will only grow from 900,000 to 1.3 million by FY24. FttN services will drop by just 200,000 to three million active premises. So we will continue to see a digital divide due to the very high price points on higher speeds."

McLaren said the high prices were a flow-on from the high cost that NBN Co was now wearing for what he called a belated upgrade.

"A very simple accounting exercise reveals the cost per premise at $8750 (ie. $3.5 billion divided by 400,000 premises) which is about twice the cost NBN Co has said was too high for the volume rollout of FttP. This is a very rough calculation since NBN Co has not disclosed what amount of the $3.5 billion will be used for FttP, but we can expect it will dominate this figure."

He said NBN Co was going down this path because it was being pushed by the threat of competition from Telstra, Optus and TPG Telecom using 5G fixed wireless access.

"NBN Co can only differentiate itself on the speed of the network as it needs to maintain high prices to cover its high and growing costs," he said. "The fixed wireless access players will mainly compete on price and will be looking to target low speed, low download volume customers in order not to run into congestion on their limited spectrum. So NBN Co needs to find a way to transition to promoting higher speeds and looking to get customers to pay a lot more for it.

"It is this change to being the advocate for higher speeds and higher downloads that is the complete backflip. Just two years ago the multi-technology mix was going to be sufficient until at least 2026. Now, with competition nipping at their heels, NBN Co needs to move to a different marketing posture.

"The pandemic may provide some political cover, but the real challenge is for NBN Co to convince everyone to pay more for higher speeds so it can weather the extra competition. If NBN Co fails in this switch then it will be forced to drop its pricing on lower and higher speed services to ensure it limits the loss of market share to the fixed wireless access players."

"If the government and the ACCC were to move from the current policy settings which seek to protect NBN Co from competition to a more pro-competitive regime, Australia would see even more fibre investment in urban areas – just like most comparable overseas markets," he added. "This would be the best outcome for Australian consumers and small businesses."

Regarding the point he made about funding, McLaren pointed out the following:

"At this rate it won't be long before the funding is above the $64 billion the Coalition (mistakenly) projected for a 90+% FttP network in the 2013 strategic review. The peak funding forecast in the last corporate plan completed under Labor in 2013 was $45 billion."