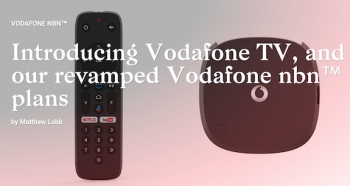 Vodafone has expanded the areas where its NBN service is available, launched a new 4K HDR Android TV-powered set-top box with terrestrial TV tuner capability, and offers 12 months of Netflix on its top two NBN plans.

Telstra has its Roku-Powered Telstra TV 2 box, Foxtel has its own Android-powered box, Fetch TV has an excellent DVR with a selection of apps, and now Vodafone has its own 4k HDR capable Android TV box.

It has a great remote that you can speak into after pressing the microphone button, and offers the full Android TV experience, alongside compatibility with apps from the Google Play store – which means you can pretty much download and run almost anything, including Stan, YouTube, iView and millions of other apps in addition to the pre-loaded Netflix app, and even things like Microsoft Word, Excel, Powerpoint and plenty more.

Use your iPhone or Android with a Vodafone TV app as an alternative to the included remote control, or connect a Bluetooth controller to play games, the Vodafone TV runs Android Nougat 7 (with an upgrade to Oreo coming soon, and an upgrade to Google Assistant capability coming in a few months).

There's an AR Logic quad-core processor, 2GB RAM, 8GB storage, a USB port letting you plug in a hard drive or USB stick, and from the demo journalists were given, the interface looked smooth and ran quickly.

It also has an antenna socket letting you receive all the digital TV and radio stations you get on your existing TV, helping to ensure this box becomes your HDMI 1 connection.

You can't record free-to-air TV on the unit, but with the proliferation of catch-up TV services, the need to record is far less pressing than it was in the past.

Due to sell for $120 outright, or available for $5 per month over 24 months, the box can be used by anyone no matter their provider, but obviously it is aimed at Vodafone's own NBN customers.

Now, while the unit won't run Foxtel Now, due to Foxtel's restrictions, it does run Netflix, and works with your existing Netflix account.

Vodafone itself states the move is "part of its ongoing commitment to deliver better broadband to Australians", and alongside Vodafone's "first-ever streaming media device", there's also a partnership with Netflix giving those on the top two of Vodafone's three NBN plans 12 months free access to Netflix on the standard 2-screen HD plan.

If you want to upgrade to the 4K plans you'll need to pay the difference between the 2-screen HD plan and the 4K plan letting you watch on four screens, but to get 12 months free Netflix practically ensures the box pays for itself.

Now, this Netflix deal doesn't last forever, you have until 30 June to take Vodafone up on the offer of giving its customers "a complimentary 12-month standard subscription to the Netflix service" on those top two of its 24-month NBN plans — Essential Plus and Premium — starting at $79 per month over 24 months.

You'll have to wait until 15 April to be able to buy a Vodafone TV unit from Vodafone stores or online.

Here's the full launch video of the new Vodafone NBN plans and the Vodafone TV, the article continues thereafter so please read on!

Ben McIntosh, Vodafone’s Consumer Business Unit director, said the company "is bringing to life the next step in its strategy of giving Australians broadband in a way that gives people the content they want without frustrating delays".

McIntosh added: “Our vision is to help our customers make the most of their broadband budget by partnering with the world’s best providers and offering a fast and easy connection process."

Naturally, Vodafone proffers up some of the stats showing Australians truly love their streaming, with Netflix research "reporting that last year, Australians devoured (watching more than two hours per day) drama series and mystery thrillers like Riverdale and The OA".

As for the new Vodafone TV, McIntosh said that "while entertainment services have undergone a massive transformation, the traditional subscription models continue to restrict consumers’ choice and freedom".

McIntosh added: “We’re not going to maintain the status quo by buying up content rights and building walls around it. We don’t think it’s fair that Australians are being locked out of access to content they want to watch.

“Australians want fast and reliable broadband, with the freedom to watch the content they love when they want. This is exactly what Vodafone is fighting for.”

So, what are the details of the new Vodafone NBN plans?

Well, following what Vodafone says is "the successful launch of Vodafone nbn in December last year, Vodafone is now close to doubling its nbn footprint and expanding to 444 retail stores across the country".

Vodafone has now consolidated its plans:

Lobb added: “Our NBN 50 plan is in hot demand because people recognise that their broadband service needs to support the introduction of more and more connected devices in the household.

"The 12-month complimentary subscription can be applied to new and existing Netflix accounts so our plans deliver terrific value, as well as easy access to the Netflix service for our customers.

“By almost doubling our Vodafone NBN footprint, more people around the country will be able to experience the Vodafone NBN difference.

“Last year we changed the game with the introduction of ‘Instant Connect’, giving people peace of mind that they’ll stay online while their NBN is being connected.

"Our great partnership with Netflix coupled with the Vodafone TV device providing easy access to the Google Play Store, further demonstrates our understanding that Australians want technology to work for them, not for their telco.”

Vodafone TV runs on Google’s Android platform with access to apps and games through the Google Play Store. The device has been custom-built for Vodafone and includes key features:

Vodafone reminds us that its Netflix offer ends on 30 June and that the subscription must be redeemed by 31 August.

"Vodafone's 'Instant Connect' means that when a Vodafone customer signs up to the NBN with Vodafone, they get the Vodafone Wi-Fi Hub which "customers can access the strength of our mobile network while they wait for Vodafone nbn activation. It is available for up to 30 days with maximum speeds of 12Mbps (down) and 1Mbps (up)."

More in this category: « No vision, ‘confusion and negativity’ surround the NBN: Budde Basslink power interconnector down after contractor error »
Share News tips for the iTWire Journalists? Your tip will be anonymous