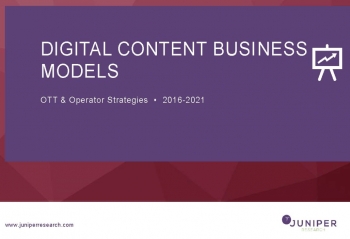 Telcos are set to follow the "Over The Top" (OTT) content providers into original programming, with sports rights something that "could become key battleground for exclusive content".

With the gurus at Juniper Research suggesting that telcos could be using sports rights as a key battleground, we only need to look at Optus in Australia with its snatching of the English Premier League rights from Pay TV operator Foxtel.

More details of how Optus is already using sports rights as a major competitive weapon below – back to Juniper’s new study first.

The study "found that consumer spend on digital content will reach $180 billion next year, up by nearly 30% on last year’s figure of just under $140 billion".

The research argued that revenue growth would primarily be driven by continued migration to streaming video services, with broadcasters and telco operators increasingly deploying their own on-demand and IPTV offerings to compete with OTT players.

According to the new research, Digital Content Business Models: OTT & Operator Strategies 2016-2021, which as always is on sale to relevant parties at relevant prices, telcos had also "recognised the pressing need to invest in attractive, original content to compete with the award-winning shows developed by Netflix and Amazon".

The report "cited the example of Spain’s Telefonica, which is to produce 8 to 10 TV series per annum from 2017, while both BT and AT&T have indicated that they might commission original drama or entertainment in the near future".

The research also argued that ‘more operators might consider enhancing the relationship through the acquisition of a strategic stake in the content provider, as with TeliaSonera’s investment in Spotify.’

The research also highlighted Twitter’s recent acquisition of the online rights for NFL as the first move by an OTT player into the sporting arena, arguing that other players could follow suit.

Indeed, in Australia, iTWire covered Optus unveiling in March 2016 its EPL plans including plans for the 2018 FIFA World Cup.

In the same month, we also covered the story of Optus offering ‘data-free’ streaming of EPL on its network.

Then, just two days ago on 6 June, Optus announced it is offering free EPL as a sign-up bonus for people signing up to its network.

So it appears using sports rights is already being used as a major competitive weapon.

However, according to research author Dr Windsor Holden, “The spiralling cost of most premium sporting rights means that bidders for exclusive live rights for must now pay several hundred million dollars per season. With most streamed audiences well under a million, this is likely to deter online-only players in the short and medium term.”