Broadband: Australia cheapest in Oceania, but 84th among 195 states Featured 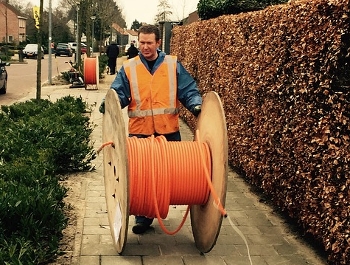 Australia may be the cheapest place for broadband in the Oceania region but it ranks a lowly 84 globally. The cheapest broadband packages in 195 countries surveyed by the UK's Cable.co.uk site was in Ukraine and cost US$5 per month. The most expensive was in Mauritania, cost US$768.16 – and was slow, at just 0.7Mbps.

The website said it had analysed 3303 fixed-line broadband deals in these 195 countries between 15 August and 20 September, with the assistance of international consumer insight consultancy BVA BDRC. (Full data can be seen here). In last year's survey, Iran was found to have the cheapest broadband.

Australia was the only country from the Oceania region to figure in the top 100 on costs, sneaking in at number 84 with packages that cost an average of US$52.77. Twelve countries were studied in the region.

The survey said that the reason broadband packages were expensive in Oceania was the dominance of island states. "Fiji, French Polynesia, Guam, Vanuatu and others could all be described as geographically remote when compared alongside the world's continental states," it said.

"As a result of logistical difficulties, populations have learned to rely heavily on mobile 3G/LTE to stay connected, keeping uptake low and pricing high on fixed broadband solutions."

Sri Lanka was the second cheapest in the world, followed by Iran and Russia.

Singapore offered the best value in the Asian region, with the cost per Mbps being just US$0.03. 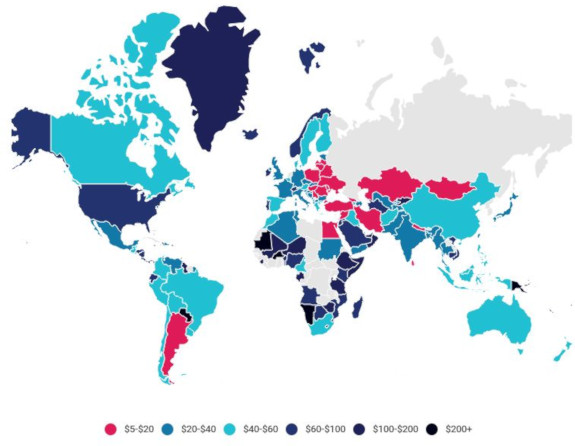 Broadband costs around the world.

The Baltics had very fast broadband, with Lithuania, Latvia and Estonia all dominated by fibre to the home. Given the dominance of FttH, speeds were high (up to 1Gbps) and data costs were cheap as well (US$0.09 per MB).

Nations in the Caribbean were at the more expensive end for connections. Among them, Saint Martin (France) had the cheapest broadband with an average package price of US$23.78, while Haiti was the most expensive at US$207.39.

Central American countries were also at the expensive end of the table. Mexico was cheapest (US$33.32, placed 45th) and Panama was most expensive at US$108.38.

The Commonwealth of Independent States - formerly the Soviet Union - was the cheapest region for broadband by some distance. Ten of the 12 countries were in the top half of the table. Russia was fourth (US$9.77), Belarus fifth (US$9.77) and Moldova sixth (US$11.28). Only Turkmenistan and Kyrgyzstan were not well served by broadband, due to their relatively sparse populations.

All 13 countries in Eastern Europe came in within the top 50, with a saturation of fibre. Romania and Hungary, first and third for this region, were also both in the top 10 countries overall.

South America was much better, with all but one of the 10 countries surveyed, coming in within the top 100. Paraguay was only one outside this, at 191, with an average cost of US$210.83.

Sub-Saharan Africa had 31 countries which qualified to be surveyed, but most figured among the 10% who had the most expensive broadband, among them Mali, Tanzania, Burkina Faso, Namibia and Mauritania.

Among the 29 countries in Western Europe that were surveyed, none figured in either the top 10% or the bottom 10%. At the lower end were Italy, France, Germany, Monaco and the UK; at the higher end were Luxembourg, Norway, Iceland, Faroe Islands and Switzerland. Jersey was the best with a cost of US$0.12 per Mbps, due to the presence of fibre on the island.

Cable-co.uk's consumer telecoms analyst Dan Howdle said: “Despite many countries providing faster access year-on-year, and the price of broadband fluctuating – sometimes wildly – from country to country, on average the price of broadband worldwide remains largely unchanged, falling just 1.64% since the fourth quarter of 2017.

“The United States is a point of particular interest in this data set. As arguably the world's most technologically advanced Western nation, its broadband is shockingly expensive compared to much of the world.

"In fact, it costs seven times as much to get a broadband deal in the United States as it does to get one in Russia, and over 64% more than it does in China. America's broadband duopoly simply cannot compete with healthier, multi-provider marketplaces."