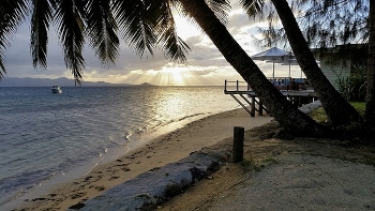 Image by HeikoBrown from Pixabay

Telstra has teamed up with the Australian Government to acquire Digicel's business in the South Pacific region for US$1.6 billion (A$2.14 billion), plus an additional US$250 million depending on how the business fares over the next three years.

In a statement to the ASX on Monday morning, Telstra said the government would pay US$1.33 billion of the price, while the company would contribute US$270 million, own and operate the company and own 100% of the ordinary equity.

News about a likely purchase first surfaced in July this year and was reportedly to prevent a company like China Mobile from buying Digicel Pacific. The deal is expected to be completed within the next three to six months.

Chief executive Andrew Penn said the company had been approached by the government to initially provide technical advice about Digicel Pacific and later considered buying the business with financial and strategic risk management support from Canberra.

He characterised the deal as representing an important milestone in Telstra's relationship with the government, a statement that could be taken to mean that he hoped it would help smooth the path to taking over the NBN when that asset is put up for sale.

"Digicel Pacific is a commercially attractive asset and critical to communications in the region," Penn said. "The Australian Government is strongly committed to supporting quality private sector investment infrastructure in the Pacific region.

The Fed Govt is doing the heavy lifting here. Telstra will only commit equity worth approx $360 million. Company calls it a "commercially attractive asset" but simply no way they would be doing this without govt urging and support 2/

"We previously said that if Telstra were to proceed with a transaction, it would be with financial and strategic risk management support from the government.

"We also said that in additional to a government funding and support package, any investment would have to be within certain financial parameters with Telstra's equity investment being the minor portion of the overall transaction. I am pleased that we have been able to achieve both of those outcomes."

He described the acquisition as being attractive for a number of reasons, including the economies of the business.

"Digicel enjoys a strong market position in the South Pacific region, holding a strong number of position in all markets other than Fiji where is the number two," he said. "The combined business generated EBITDA of US$233 million for the financial year ended 31 March 2021, with a strong margin.

"Digicel Pacific has already invested significant capital in PNG, which is its largest market, to achieve extensive network coverage, including 4G to 55% of the population. The medium to long-term capex to sales is expected to be about 15%."

The Telstra statement said the deal was expected to return an attractive internal rate of return and was higher than all Telstra's merger and acquisition criteria - EPS accretive, ROIC above WACC and more accretive than a share buyback. The deal hints at a multiple of 5.8 to 6.9 times EBITDA for the full-year 2021 for the acquisition.

Penn said Telstra had provided guidance to the market for the full-year 2022 recently and also hopes for FY23, adding that these did not include any allowance for the Digicel acquisition, which he claimed would enhance the company's outlook further, depending on when it was completed.