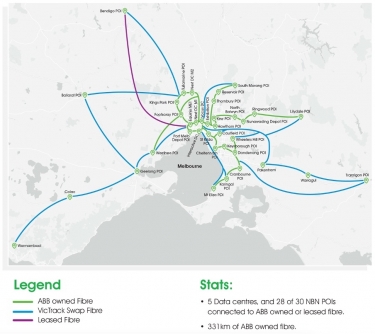 Aussie Broadband has announced a ten-year deal (including two ten-year options) with VicTrack to swap access to their respective fibre networks. VicTrack is a Victorian Government enterprise business that operates the state’s fibre assets.

The swap will also increase the metro coverage of Aussie Broadband’s Victorian fibre network and will provide additional redundancy and protection options without needing to construct further backbone links. This will allow capex originally planned for Victoria to be used to expand the network in other states, the company said.

“Smart partnerships like this one with VicTrack enable us to not only expand our network beyond what was originally planned, but also frees up capital to improve our reach in other states,” he said.

“This is a win for Aussie Broadband, a win for VicTrack and most importantly, a win for our customers and their access to high speed, quality internet connections.”

The transaction is a swap of capacity of equal and agreed value with a right of offset on cash consideration such that the cash flow impact on each entity is modest. Aussie Broadband will fund the cost of the initial Victrack POI connections estimated to be $1.4m. This is recovered over the initial 10-year period of the lease.

The initial assessment of the application of accounting standards to the transactions is as follows:

The impact on after-tax earnings will be immaterial but EBITDA will be improved by the impact of the operating lease income, Aussie Broadband said.

On the cover page is a map outlining the VicTrack swapped fibre paths, Aussie Broadband-owned fibre, and other leased POI backhaul fibre in the state. Under the swap agreement, Aussie Broadband said it has access to additional VicTrack fibre paths throughout the state not included on this map.

This first appeared in the subscription newsletter CommsWire on 6 September 2021.