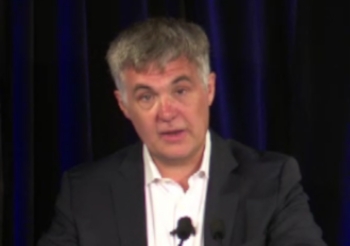 Stephen Rue says NBN Co is on target to be cash-positive by the end of FY2022.

NBN Co, the company rolling out Australia's national broadband network, has increased the average revenue it earns per user by a dollar to $45 and has more than 4.6 million premises connected as of the end of the half-year 2019, the company's chief executive Stephen Rue says.

The company continues to bleed red ink, though, running up a loss of $1.7 billion for the half-year. However this represents a decrease of 29% year-on-year. In the six months to the end of 2017, the loss was $2.4 billion. 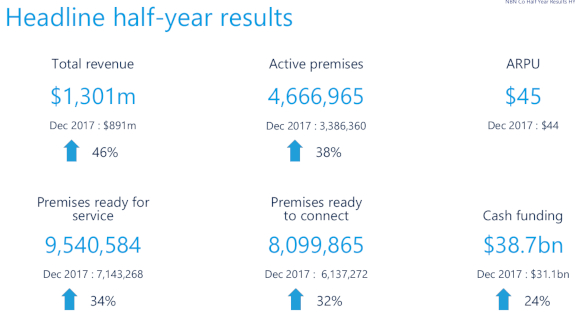 Despite this string of big losses, Rue said, in response to a question on Monday, that the company was on track to become cash-flow positive by the end of full-year 2022, the time when the rollout will officially end, including the time provided for all connected premises to hook up to the network.

He said revenue for the quarter had risen to $1.3 billion from the $891 million in the corresponding period a year prior, a rise of 46%. The forecast for revenue by FY22 is $5 billion.

The company has said it needs to reach an ARPU figure of $%2 in order to break even. Recently it launched a promotion to try and get users to move to 100Mbps connections, by offering retail service providers a discount of $160 for each customer who signed up for these plans before the end of June 2019.

NBN Co pushed 50Mbps plans for a while, under a campaign known as Focus on 50. In December last year, the company announced new plans for businesses in order to increase its revenue from the sector.

“I’m proud of the NBN Co team and industry wide effort to deliver another remarkable set of results over the last six months," he said.

“With less than 18 months of the rollout remaining, there is a significant amount of work still to be done in partnership with the industry, as we continue our momentum to deliver on our biggest ever deployment year and transition into our biggest activation year.

“I have full confidence in our ability to reach our 2020 target as our strong track record demonstrates. The executive leadership team remain focused on ensuring universal broadband access to all of Australia by the middle of next year.

“In partnership with the industry, we are continually seeking to make further improvements to ensure an end user customer experience which is aligned with consumer expectations.

“As we continue to make more and more premises ready to connect each month, this is helping to ensure the nation is at the forefront of digital innovation to deliver enhanced social and economic benefits across the community.”

In a statement, the Federal Government welcomed the NBN Co's results, saying it "confirms the company is exceeding its connection and financial targets".

"NBN Co’s 2018-19 half-year results show strong performance and growth in activations and revenue with the company powering ahead to connect all Australians to fast broadband by 2020," Communications Minister Mitch Fifield and Finance Minister Matthias Cormann said.

"The latest results confirm the company’s solid performance across all metrics and provides further evidence of the benefits of the Coalition’s faster, more affordable NBN rollout."

More in this category: « Business case for 5G still unclear, survey finds Vodafone offers incentives for those who take up 100Mbps plans »
Share News tips for the iTWire Journalists? Your tip will be anonymous