The top ranked ISP is Telstra NBN, with prime-time Netflix speeds of 4.38Mbps.

Ignoring the Telstra split, the rankings are unchanged since December 2018, however the other leading ISPs all showed a slight drop in speed compared with the previous month. 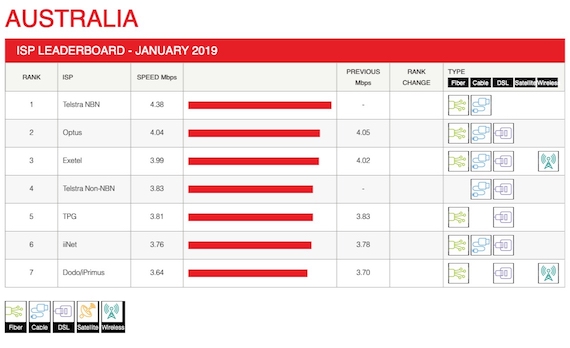 The remaining three majors all move down one place, below Telstra non-NBN.

No explanation was given for the changes, but there does seem to be some seasonal variation as three of the previous six leading ISPs also showed a decline between the December 2017 and January 2018 reports.

How are these numbers obtained? According to Netflix, "For 'Prime Time', we calculate the average bitrate of Netflix content in megabits per second (Mbps) streamed by Netflix members per ISP. We measure the speed via all available end user devices. For a small number of devices, we cannot calculate the exact bitrates and streaming via cellular networks is exempted from our measurements."

According to a Telstra spokesperson, "The Netflix results is due to Telstra customers enjoying the fastest Internet speeds available in Australia, combined with access to Australia's most extensive and sophisticated caching capacity in the region."

More in this category: « Nearly a quarter of NBN users on slowest speeds Telstra boasts of No.1 Netflix speed ranking 12 months in a row »
back to top