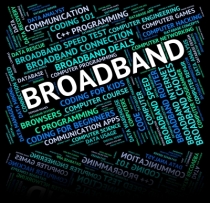 Underperforming broadband services are still a problem for some consumers, with a newly publish report revealing that 12.4% of consumers continue to experience underperforming services that “rarely come close to reaching their maximum plan speed”.

The sixth Measuring Broadband Australia report from the competition regulator, the Australian Competition and Consumer Commission (ACCC), released on Tuesday, reveals that broadband speeds slowed slightly during the busy evening hours - but overall results continue to be good.

The Commission says that these are services that achieve less than 75% of their advertised speeds in almost all speed tests, with most of the affected consumers paying for NBN50 or NBN100 plans over Fibre to the Node (FTTN) connections.

According to the Commission these slower download and upload speeds are likely to be impacting consumers’ use of streaming, telecommuting, online gaming and using cloud services, for example to store or share photos and videos.

“We now want to see more action from both NBN Co and retail service providers (RSPs) to help the more than one in ten connections that simply do not perform to their plan speed,” ACCC Chair Rod Sims said.

“In many cases, these limited speeds are caused by in-home wiring issues that can be fixed with a visit from a technician.”

The ACCC found that that if these services were able to reach close to their advertised plan speed, RSPs’ download and upload speed results would improve by 2.0 to 6.8 percentage points in the busy hours, and their average upload speeds by 1.5 to 10.7 percentage points.

Article continues below, with two more images to come, please read on! 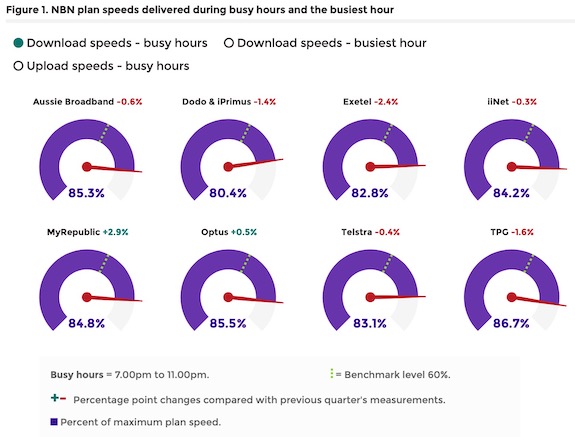 The report contains, for the first time, download speed results for Fibre to the Curb (FTTC) connections, showing they achieved 88.9% of maximum plan download speeds, or 91.5% when underperforming services were excluded. 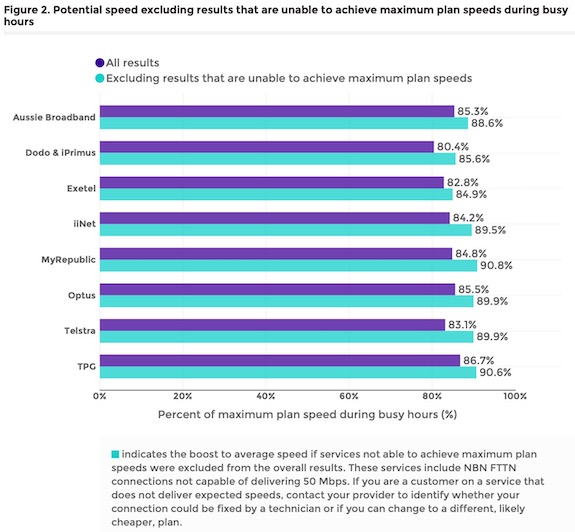 These results were broadly in line with results for Fibre to the Premises (FTTP) connections and HFC, and significantly above results for FTTN.

The report also tracks the rate of outages experienced by consumers, showing that program volunteers, on average, experienced an outage of more than 30 seconds every one to two days, a similar rate to the previous report.

The Commission says Optus has investigated and addressed a technical problem that caused its customers to experience a much higher rate of outages - an average of 2.6 a day.

This issue was uncovered and highlighted by Measuring Broadband Australia’s two most recent rounds of testing, and the Commission says recent additional tests suggests Optus' level of outages is now comparable to other RSPs.

“The ACCC is encouraging more Australians to sign up as volunteers for the Measuring Broadband Australia program, to broaden the coverage of the program and to ensure it continues to reflect experiences of consumers around the country as the NBN roll-out continues.

“This program would not be possible without the support of our volunteers Australia-wide who have agreed to host a whitebox on their home broadband connection.

“Consumers whose service provider is not currently included in our reports are particularly encouraged to sign up.”

And the ACCC reports that, in comparison the average busy hour speeds from legacy ADSL services were 7.8 Mbps.

“It is very important that those consumers not yet wanting to pay for faster speeds can still gain access to a 12/1 plan at prices that had been available for ADSL services”, Sims said. 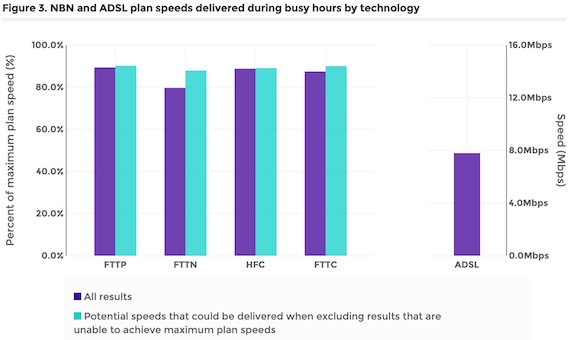 This latest Measuring Broadband Australia report is the first to contain download speed results by state and territory.

While most RSPs met their advertised speed claims during busy hours, Dodo, iPrimus and Exetel often did not, the ACCC reports.

“We will be discussing these results with Dodo/iPrimus and Exetel, including whether their advertised speed claims should be immediately revised in light of these results,” Sims said.

The report shows the speeds data for NBN fixed-line services of eight major RSPs. Testing took place in May 2019 using a sample of 1095 volunteers.