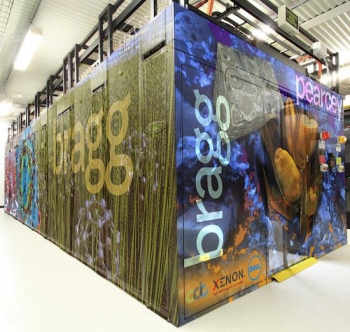 CSIRO is inviting tenders for the supply of a new supercomputer.

The next supercomputer to be acquired by CSIRO will combine CPUs and GPUs to deliver a combination of performance and energy efficiency.

CSIRO was a pioneer of GPU-accelerated computing in Australia, and its Bragg accelerator cluster (pictured) was ranked 156 on the Top500 when it was commissioned in 2012.

Bragg was supplied by Xenon Systems, which has just been selected to expand the National Computational Infrastructure's Raijin HPC system.

But technology marches forward, and the organisation has decided it is time to start looking for Bragg's successor.

The new system will be capable of petaflop speeds, significantly exceeding Bragg's performance and putting it among the 100 fastest systems in the current Top500 list. It is also expected to rank highly on the Green500 list of energy-efficient supercomputers.

The successful bidder will be asked to deliver and support the system for three years within a $4m proposed budget.

The tender process is open for submission at AusTender, and will close on 19 December.

The winning system is expected to be up and running during the first half of 2017.

BACK TO HOME PAGE
Published in Technology Tenders
Tagged under