The US Government's reaction to Twitter's blocking of dissemination of a story about Hunter Biden, the son of Democrat presidential candidate Joe Biden, appears to have forced the social media platform to change its rules around its so-called Hacked Materials Policy.

On Wednesday US time, the company said it had blocked access to the article, published by the New York Post with the headline Smoking-gun email reveals how Hunter Biden introduced Ukrainian businessman to VP dad, because its policy prohibited the sharing of links or images of hacked content.

The US Senate Judiciary Committee has said it would conduct a vote in the coming week on whether to subpoena Twitter chief executive Jack Dorsey over the company's censorship of the story.

On Thursday, the company's legal executive Vijaya Gadde said in a thread: "Over the last 24 hours, we’ve received significant feedback (from critical to supportive) about how we enforced our Hacked Materials Policy yesterday. After reflecting on this feedback, we have decided to make changes to the policy and how we enforce it.

"We will label Tweets to provide context instead of blocking links from being shared on Twitter." 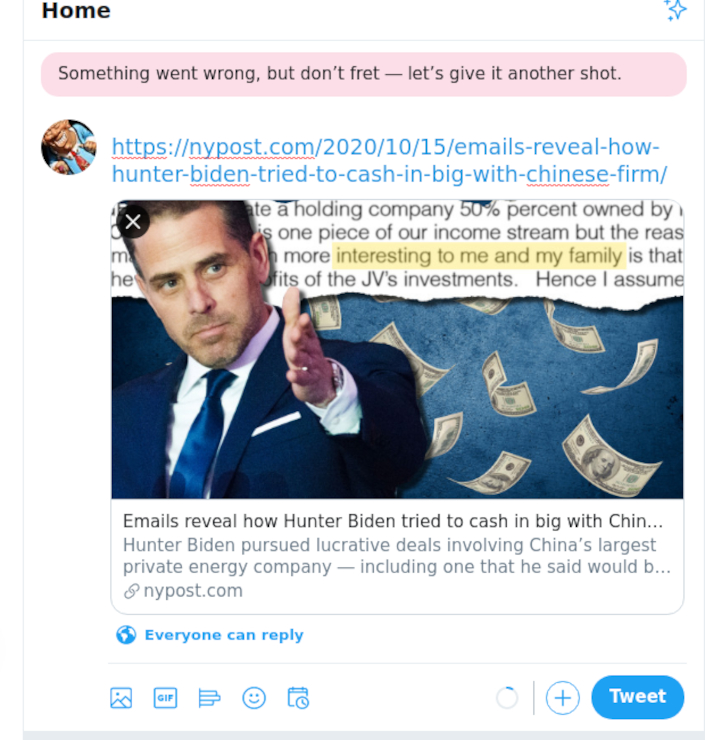 And she added: "All the other Twitter Rules will still apply to the posting of or linking to hacked materials, such as our rules against posting private information, synthetic and manipulated media, and non-consensual nudity."

A vast amount of content based on material that has been hacked has been shared over the years on Twitter. As well-known American journalist Glenn Greenwald pointed out in a piece for The Intercept: "Indeed, many of the most celebrated and significant stories of the last several decades — the Pentagon Papers, the WikiLeaks’ Collateral Murder video and war logs, the Snowden reporting, the Panama Papers, the exposés from the Brazil Archive we reported over the last year — relied upon publication of various forms of 'hacked materials' provided by sources.

"The same is true of the DNC and Podesta emails that exposed corruption and forced the 2016 resignation of the top five officials of the Democratic National Committee."

Twitter spokesman Brandon Borrman said the article was still blocked, but that does not appear to be the case as this writer was able to tweet out a link to it on Saturday morning. There were two follow-up stories run by the Post, on Thursday and Friday, and somewhat curiously, a link to Thursday's story cannot be tweeted out as can be seen from the screenshot embedded in this article. Friday's article posed no such problem.

Borrman added that the new policy was not yet in place, but did not give a date as to when it would take effect.

Facebook had a somewhat more restrained reaction to the story, saying it would reduce its distribution.

The incident comes with just 15 days left for the US presidential election. Incumbent Donald Trump appears to be headed for defeat, trailing Biden by more than 10 points in the most recent polls.