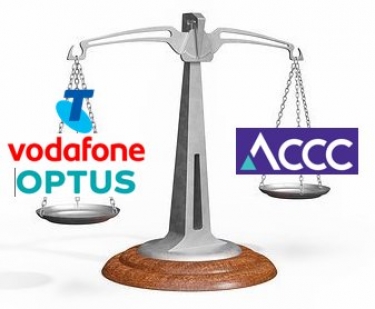 This week, we had the ACCC issue a report on increasing mobile pricing by the three major mobile network operators (MNOs), Telstra, Vodafone and Optus. In reporting this, they assigned the blame at the court for overturning the ACCC's banning the of the merger of TPG and Vodafone. The're wrong - see why!

I have been following and participating in the mobile market in Australia for several decades. There is no positive outcome for a fourth mobile carrier in this market.

At Hutchison, I oversaw the launch of the Hutchison CDMA network in 1999, and then at Lucent in 2000, I was involved in cleaning up the mess created by the failure of OneTel.

When Telecom NZ acquired AAPT in 2000, it stopped the construction of its mobile network and went into partnership with Hutchison in building a 3G network. Why? Because in reviewing the business case, the assumptions didn't stack up, and when adjusted - it was in the red.

Emerging from this turmoil, the third operator in Australia, Vodafone was operating a very marginal business. Likewise, the Hutchison 3G operations were not profitable, prompting the merger of Vodafone and HTA, under the Vodafone brand. That business, while reporting one year of positive business outcome, then entered a loss making cycle due to the well reported 'Vodafail' issues in 2010/11.

I have been involved in building new entrant mobile business cases in both Australia and New Zealand. Generally, if they look positive, it's because the assumptions have been unrealistically tweaked.

Some 10 years ago, when TPG purchased its first tranche of spectrum, as an analyst, I speculated that TPG’s desired outcome would be to use the spectrum as leverage to gain a better MVNO deal, or a merger position with an MNO. The amount of spectrum held by TPG, even when they did merge with Vodafone, was not enough to conduct a mobile business given the growing mobile broadband consumption appetite of customers.

My opinion on TPG's aspirations did not change, even when they were conducting their trials with Huawei. TPG had to lift the threat of entering the market in order to get its desired merger.

In a market the size of Australia, especially with its relatively low population and higher population dispersion, a fourth mobile operator is a very risky concern - even for the likes of TPG.

Regardless of the “ambit claim” arguments around the banning of Huawei from providing 5G networks in Australia, I still believe there was no positive business case for TPG to proceed, even with Huawei. Vendor costs are but a small portion of the overall construction costs in building a mobile network. Most of the cost is in acquiring and readying base station sites and providing backhaul to those sites.

The ACCC, in blaming the MNO price increase on its failure to win in the courts, is a fallacy, as a fourth viable mobile carrier was never going to happen.

There are also other issues that are likely driving the MNOs to increase pricing:

As the ACCC say, consumers do have a choice. I moved my teenage daughter's service from one of the MNOs to a Virtual operator (MVNO). In doing so, she now has access to six times the broadband allocation at the same cost, on the same network, with the added benefit of the data allocation not expiring at the end of each month. If consumers are truly unhappy with the pricing from their MNO, they do have a choice.

Perhaps the ACCC should take the court's decision on the chin and get on with making some correct decisions, instead of wasting tax payer funds on fruitlessly litigating cases that, even if they won, would likely not have delivered any positive outcomes for consumers. As Peter Alderton mentions here, perhaps they can help in determining the terms under which MVNOs will be able to access the MNO’s networks.

More in this category: « Kalkine companies fined $350,000 for violation of telemarketing and spam laws Household electricity bills expected to fall: ACCC »
Share News tips for the iTWire Journalists? Your tip will be anonymous