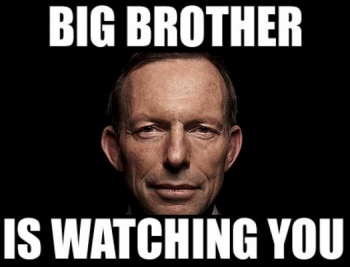 OPINION: Embattled Prime Minister Tony Abbott, his data retention plans under fire on all sides, is attempting to deflect the pressure onto the Opposition. Bill Shorten is not buying.

Tony Abbott has sent a letter to Opposition Leader Bill Shorten challenging him to support the Government’s data retention bill.

The Government has made the contents of the letter public by leaking it to its cheerleaders in the Murdoch press. The letter, a copy of which has been ‘obtained’ by The Australian, uses the recent Martin Place siege as a justification for the new laws, saying "I am advised by both the Australian Security and Intelligence Organisation (ASIO) and the Australian Federal Police (AFP) that metadata and related telecommunications information played an important role in the response to the Lindt Cafe siege and has been integral to the investigation following the terrorist attacks in France.”

No evidence is offered for this assertion, but Abbott says: “In light of these vivid demonstrations of the importance of metadata for tackling the growing threat of home-grown extremism, I would again like to underline the importance of bipartisan support for a strong data-retention regime. Metadata has been vital to the ongoing investigation and disruption of onshore extremists.”

No mention of the fact that both the Australian and French perpetrators had previously been identified as security threats under existing laws, but security agencies has decided they were not a serious threat. There is also the obvious fact that existing laws had been effective, by Abbott’s own admission, in investigations after both incidents.

Abbott says he wants the House of Representatives to debate the data retention bill on Monday 2 March – just one working day after the Parliamentary Joint Committee on Intelligence and Security (PJCIS) presents the findings of its current inquiry into the draft legislation. Abbott said in the letter that he “expects” the bill to have passed both the House of Representatives and the Senate by 16 March.

It will not pass the Senate unless Labor supports it, because the Greens and many on the cross benches oppose it. Abbott’s letter and its selective leaking is an attempt at ‘wedge’ politics – forcing one’s opponent not to resist one’s policies for fear of appearing soft.

Abbott even wanted the bill to be debated before the PJCIS presented its findings, now saying he has “reluctantly” agreed to delay it until after that date, but that nevertheless “recent events” require a prompt response.

Abbott mentioned Shorten’s comments that Labour would “work with all appropriate commitment to make sure that we get the best laws to protect Australians.

“In this spirit, and in keeping with your bipartisanship on national security, I strongly urge you to support the prompt consideration and passage a bill which gives our agencies the best possible capability to protect the safety of our community.”

If the letter is intended to pressure Labor and Bill Shorten, it is not working. Shorten, sensing the increasing resistance to the data retention laws and riding the current wave of criticism of the Government’s policies, is not taking the bait.

Speaking on ABC TV yesterday. Shorten said the ALP would not be rushed and would consider its position after the PJCIS reports to Parliament on 27 February. But he was careful with his words, lest Abbott’s wedge tactics gain some traction.

"When it comes to fighting the dreadful scourge of terrorism we're all in this together, but we do no services or favours to the Australian people and their national security by rushing laws through the Parliament. Rush and haste will not help improve Australia's security."

Hence Abbott’s ‘letter’ to Shorten. Abbott’s attempts to ram the legislation through with only a cursory nod to the PJCIS recommendations hardly sits well to his latest promise to be collegiate and consultative. He is back to his bully boy best – he just can’t help himself.It is hard to escape the conclusion that the Government is getting increasingly desperate about the chances of passing its data retention bill. Opposition to it has grown so widespread that even that current terrorism scare, which is being actively fomented by the Government, is proving insufficient to ensure its passage through Parliament.

Meanwhile, opposition to the bill grows, on privacy, cost, and technical grounds. The ‘civil liberties brigade’ (Abbott’s derisory term for anyone opposing the measures) are against it in civil liberties grounds, the industry opposes it on the grounds of cost, and others oppose it because it simply will not work (see Greens Senator Scott Ludlam’s trenchant criticisms).

The only people backing the bill, in addition to an increasingly rattled Government, are the very security agencies who will gain more power and more funding to carry out a mass surveillance campaign against the entire Australian population.

In threatening Bill Shorten with his undisguised wedge tactics, Abbott (not for the first time) is overplaying his hand. It gives Labor just the excuse it needs, particularly in the current political environment, to further embarrass the Government under the pretext of examining the legislation more closely.

It’s not about security, it’s about politics. Wedges can work both ways.

More in this category: « International tax cheats in ATO’s sights Coming soon - better 4G for the bush »
Share News tips for the iTWire Journalists? Your tip will be anonymous