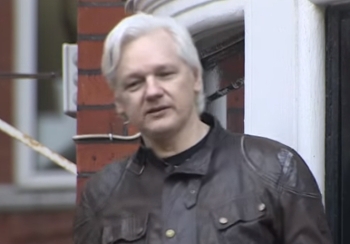 The US Senate's Select Committee on Intelligence has invited WikiLeaks publisher Julian Assange to testify before it in connection with its probe into alleged Russian interference in the 2016 US presidential election.

The letter, from Richard Burr, chairman, and Mark Warner, vice-chairman, respectively of the panel, was sent on 1 August through the US embassy in London.

In a tweet, the whistleblower website said its legal team was considering the offer, "but the conditions must conform to a high ethical standard".

Assange has been holed up in the Ecuadorian embassy in London since June 2012, having been granted asylum, and later citizenship, by Ecuador.

The Australian claims he has taken refuge in the embassy to avoid extradition to the US where he fears he will face either a life sentence or else execution for publishing leaked material that showed US atrocities in war zones.

BREAKING: US Senate Intelligence Committee calls editor @JulianAssange to testify. Letter delivered via US embassy in London. WikiLeaks' legal team say they are "considering the offer but the conditions must conform to a high ethical standard". Also: https://t.co/pPf0GTjTlp pic.twitter.com/gQIUstbGbq

Britain has said it will arrest Assange if he leaves the embassy as he skipped bail in order to take refuge in the building.

News of the invitation to testify in the US comes after Ecuador President Lenin Moreno said recently that he has no objection to the UK agreeing to extradite Assange to the US, if there is an understanding that he will not face the death penalty.

There have also been reports that Ecuador and Britain have reached, or are about to reach, a deal on ending the asylum for Assange.

The letter from Burr and Warner said: "As you are aware, the Senate Select Committee on Intelligence is conducting a bipartisan inquiry into Russian interference in the 2016 US elections.

"As part of that inquiry, the Committee requests that you make yourself available for a closed interview with bipartisan Committee staff at a mutually agreeable time and location.

"Please respond in writing upon receipt of this letter."

Moreno told the Spanish newspaper El Pais in an interview in the last week of July that Ecuador was not helping Assange to exercise his rights by prolonging his stay in Ecuador's London embassy, and therefore had to find a way to end the impasse.

He said any solution would have to ensure Assange's rights, especially his right to life, while at the same time it removed what was obviously a problem for his country.