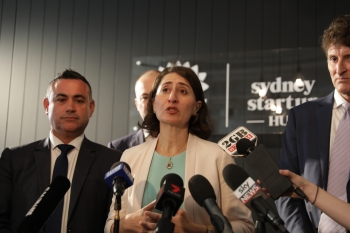 Microsoft has launched its ScaleUp program for technology startups in Sydney, the eight location in the world to join the likes of Seattle, Beijing, Berlin and London.

The launch will see the Microsoft ScaleUp program take up residence in the state of the art Sydney Startup Hub which was officially opened by the NSW Premier, Gladys Berejiklian, today.

The establishment in Sydney of the Scaleup program – formerly known as Microsoft Accelerator – follow’s Microsoft’s recent announcement that Sydney-based Annie Parker (formerly the CEO of Fishburners and co-founder of muru-D) has been appointed to lead Microsoft’s startup programs globally, including Microsoft ScaleUp.

Microsoft Australia Managing Director, Steven Worrall said opening of the Sydney ScaleUp program was a resounding acknowledgement of both the quality and potential of Australian tech start-ups and entrepreneurs”.

“It is also recognition of the important role Governments across Australia continue to play in fostering a strong start-up ecosystem and providing the infrastructure, such as the Sydney Startup Hub, to support and grow the next generation of Australian tech businesses.

“Our aim is to be the ‘glue’ that connects the start-up ecosystem in Australia. Being part of the Sydney Startup Hub enables us to realise that ambition.  For any business to succeed it needs strong local and global connections and we believe Microsoft can help a startup be global from the outset.”

The ScaleUp program helps fast-track each stage of the journey for a start-up business, typically runs for four months and is focused on both business and technical development.

In the five years the Microsoft ScaleUp programs have been running, close to 730 companies globally have graduated from the program and raised almost US$3 billion in venture capital with 48 exits – where the company is bought out or acquired by another company.

Microsoft says it made the decision to locate its latest ScaleUp program in Sydney, where it also has its Australian headquarters, following extensive research and meetings with the Sydney startup ecosystem.

NSW Deputy Premier John Barilaro, said the decision by Microsoft to move in to the new Sydney StartUp Hub was a “huge vote of confidence in our city, our economy and the people that make up our start up community”.

“Within Microsoft, there is enormous competition to secure Microsoft Scale-Up for different countries, so it’s an incredible result to see Sydney chosen as the newest location to host this sought-after and highly-acclaimed program.

“Last July the NSW Government committed $35 million to create a world leading startup and innovation hub and today we can see what has been created.

“Without the NSW Government’s investment in the Sydney StartUp Hub, it certainly would not have been possible to attract a program of Microsoft’s calibre to Sydney.”

Microsoft says it is in the process of recruiting a managing director to lead the Sydney ScaleUp program and expects to run its first four-month program before the end of 2018.

More in this category: « Salon turns to cryptocurrency mining to make up for lost ad revenue Digital transformation a key focus at CeBIT 2018 »
back to top