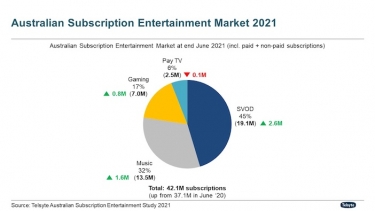 Despite the eased restrictions during early 2021, pandemic-wary Australians are switching on entertainment subscriptions at a rapid pace and had a total of 42 million subscriptions at the end of June 2021, up from 37 million in June 2020, according to new research from emerging technology analyst firm, Telsyte.

Most (78%) Australian households had at least one entertainment subscription at the end of June 2021, an increase from 65% three years earlier. Subscribing households now average of 4.3 entertainment services (up from 2.7 in June 2018), largely driven by SVOD subscriptions, the research shows.

Telsyte forecasts a strong future for consumer subscription services, with many seen as ‘must-have’ services, and not just for entertainment, but also for eCommerce, deliveries, fitness, education and audio.

With entertainment subscriptions set to exceed 60 million by 2025, the games subscription category is expected to enjoy fast growth in coming years, catching up to music and SVOD, Telsyte says.

Telsyte said that in contrast, Foxtel’s Pay TV segment remains under pressure due to the increasing adoption of SVOD. The study found the total Pay TV market declined by 2% to 2.5 million in June 2021. Foxtel’s Pay TV’s base declined by 4% during the same period while Fetch remained stable.

As the world recovers from the impact of the COVID-19, video content production and release schedules remained disrupted in 2021, which has left Australians hungry for fresh content, fuelling uptake of multiple services.

Australian Subscription Video on Demand (SVOD) services reached 19.1 million at the end of June 2021, an increase of 16% from 16.4 million in June 2020. A reliance on SVOD services remained high with 57% of users believing SVOD is an “essential service” (up from 52% a year ago).

Australians’ love of sport has been further highlighted in the past 12 months. The sports category grew 48% year-on-year (once the decommissioned Telstra Live Passes is removed) and the percentage of paid sports subscriptions has also improved significantly, from less than 15% a year ago to over 50% at the end of June 2021. 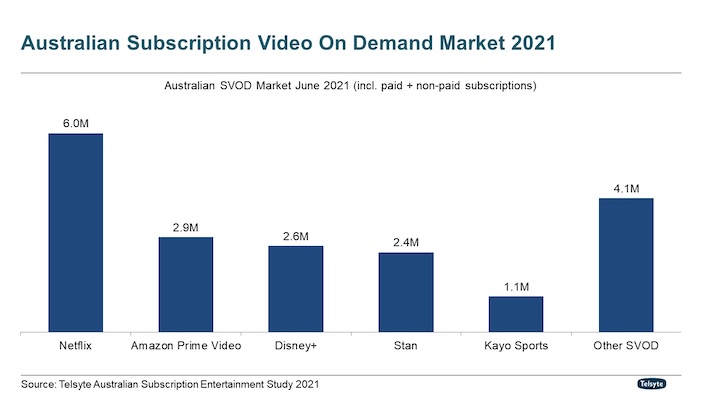 Sports will remain a critical category for SVOD, as it commands higher monthly rates compared to other services, and is often a battleground for broadcast rights. In fact, the total revenue generated by Sports SVOD services grew by 54% compared to 20% for non-sports services. Kayo Sports is now the largest SVOD service dedicated to Sports as it takes over from Telstra Live Pass in AFL and NRL apps.

The market is well-positioned to facilitate multiple services as platforms, such as Fetch, Apple TV and Foxtel are being more inclusive, allowing easy subscriptions to multiple services and single billing through the one platform. The study found nearly half (46%) of SOVD users are interested in using a one-stop platform.

Increasing investment in original content will become more important as part of SVOD providers’ growth and retention strategies. Additionally, Australia has been a popular choice as a source of content and content production.

Most (51%) SVOD customers believe it is important to have content that has Australian stories, voices, culture, and values on SVOD services.

While consumers are comfortable with subscribing to multiple services, economic pressure due to the pandemic and employment has affected video entertainment budgets.

Telsyte found among people willing to pay for streaming video services, the average monthly budget has decreased slightly (9%) from a year ago to just under $30 in 2021.

Telsyte anticipates consumers will increasingly consider ‘sharing’ the cost of subscriptions with others, in order to access more services in the future. According to the study, half of SVOD users are likely to share services to reduce costs in future. That percentage increases to 61% amongst those already using 3 or more services.

Freely available Broadcasting Video On Demand services (BVOD) (including 7Plus, 9Now, 10Play, ABC iView and SBS On Demand) remained popular as Australians look for more content beyond just SVOD services. Most BVOD platforms had more than 10 million viewers during FY2021.

The recent Tokyo Olympics coverage saw the 7Plus audience and usage surge with more than 4.7 billion minutes streamed over the event, highlighting the potential for ad-supported video streaming.

This first appeared in the subscription newsletter CommsWire on 20 September 2021.

More in this category: « Dimension Data, Cisco on the track of rhino poachers Sophos signs first OZ distribution agreement »
Share News tips for the iTWire Journalists? Your tip will be anonymous