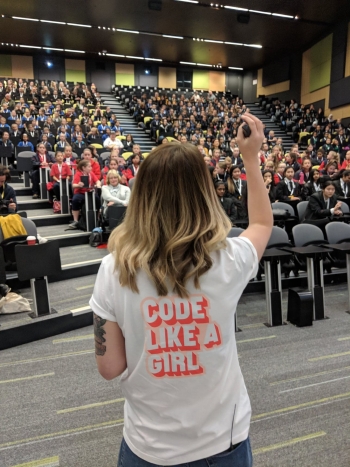 Code Like a Girl founder Ally Watson address the Go Girl, Go For IT event

A record 2000 schoolgirls from 73 Victorian schools have participated in a Melbourne tech event designed to encourage them to take up a career in the technology sector.

Busting the myth that tech is for boys, the record number of schoolgirls at the Go Girl, Go For IT event got a hands-on experience with apps, robotics and coding – and learnt about career opportunities in the tech sector from a number of female role models.

Comprising female students from years 5 to 12, attendees were shown how to make a voice activated app with Alexa, learned about robots in banking with Robogals, 3D car design, digital aviation as well as ethical AI.

The students also heard from leading women in the technology field, including female tech entrepreneur, Ally Watson, founder of Code Like a Girl, who says she  believes that having visible role models in tech is as equally important as showing them the tech itself.

“When a girl closes her eyes and pictures a successful developer, they’re going to picture a Mark Zuckerberg or Steve Jobs – always a man,” said Watson.

“I often say ‘you can’t be what you can’t see’, so it’s really important for me to simply be visible to the girls attending; to share my story and insights into my career and study in computer science and show them that yes, girls can do this. That there’s such an exciting career for them in tech if they want it.”

Organisers of the event say studies show that only 3% of school girls are considering an IT career and only one in four Australian IT graduates are female.

The Go Girls Go For IT event aims to close the gender gap by fostering an interest in tech at an early age.

Fi Slaven, program director, Go Girl, Go For IT, said this year’s event was the best turnout yet.

“Each year Go Girl, Go For IT gets bigger and better. This year we had a record turnout of over 2000 girls from years 5 to 12 which was just incredible. The girls were very enthusiastic and particularly loved the hands on sessions where they could touch and feel and play with the latest gadgets. We’ve learned a lot from this year and are already thinking of ways we can make the 2020 event even bigger.”