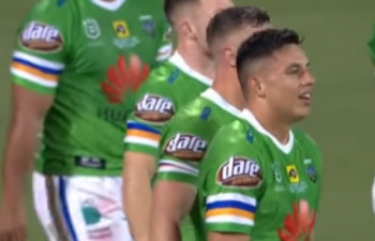 Chinese telecommunications equipment vendor Huawei Technologies says it will end its role as a major sponsor of the NRL team Canberra Raiders after this season.

The company's Australian arm said on Monday that its logo would be moved to the back of the Raiders' jersey after the 2019-20.

However, a campaign led by the US against the use of its 5G equipment has hit Huawei's operations and the company is expected to face difficult times ahead.

Huawei Australia chief corporate affairs officer Jeremy Mitchell said: "We are very proud of our major sponsorship of the Raiders and the fact that it lasted for almost 10 years shows how successful the partnership has been.

"[Raiders head coach] Ricky Stuart often talks about the importance of the Raiders jersey, what it represents and stands for, Huawei understood that and felt very privileged that our name was part of the club's history and part of the Raiders story.

"It is so disappointing that it has ended this way but are very proud of the small role we have played in this great NRL club.

"Our near decade as major sponsor of the Raiders has been one of the most successful in Australian sport and we are very sad that it has come to an end.

"Through our annual charity round, Huawei has not only raised much needed funds but has provided a platform for charities to profile their work to millions of Australian they otherwise would not have been able to reach. We are proud of this achievement and the social impact we have made.

"Even after the Turnbull Government banned us from 5G, we managed to find the resources to continue the sponsorship but we just can't financially support it any longer.

"We now turn our attention to the rest of the 2020 NRL season and hope with all our hearts that the Raiders can go one better and pull off that long awaited grand final win this year."

Raiders chief executive Don Furner said: "The Canberra Raiders and Huawei have enjoyed a fantastic partnership for nearly a decade – they have been by far our longest serving major sponsor.

"Huawei's commitment to the Raiders has been unwavering and we have worked together to achieve so much for the Raiders family, Rugby League itself and the broader community with our charity work.

"This relationship has been about so much more than just a logo on a jersey, we have worked with Huawei on a number of very important community initiatives and fundraising opportunities for very worthwhile causes.

"We are very sad that they will be stepping back as major sponsor of the Raiders but we are very proud of all that we have achieved together and we hope we can finish this season off successfully."

Stuart said: "While some people talk about having strong partnerships, they don't mean very much until you go through bad times together and back each other up.

"We at the Raiders supported Huawei Australia through a difficult period and Huawei supported us through a very difficult time as well.

"Huawei and the Raiders went well beyond simply being a commercial arrangement, we forged a very strong relationship that became very personal and it is one which we will always be grateful for."