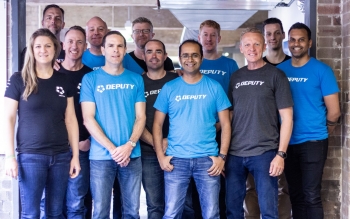 The Deputy executive team mark completion of the capital raising

Sydney-based workforce management software solution provider Deputy has closed a $111 million capital raising which has been billed as Australia’s largest ever Series B funding round.

Deputy says the funding will be used to accelerate growth of its business and “transform the future of hourly-paid work through new, innovative products and build Australia’s finest product and engineering team”.

The Sydney-headquartered start-up claims more than one million registered users, and works with businesses like Qantas, McDonalds, Aesop, Amazon, and Gelato Messina to empower their hourly paid workforce.

And to date, Deputy says it has has rostered 200 million shifts, equating to over 1.2 billion hours of work, and facilitated over $30 billion in payroll payments.

“At Deputy, we’re making the lives of employers easier. Taking away some of the administrative strain and giving them untold hours back to focus on what matters: running their businesses, or spending time with their families” said chief executive and co-founder Ashik Ahmed. “We’ve had immense success up until now, but we’re only just getting started.

“There are 2.2 billion hourly paid workers in the world today, but too many of these are still managing their jobs in archaic ways. The opportunity here is huge: we envisage a day where every single shift being worked is powered by Deputy – and this funding allows us to build the best product and engineering team in the world that helps us get there.”

Deputy’s Series B funding round was led by Silicon Valley-based venture capital firm IVP, known for its investment in start-up successes Dropbox, Snap, Slack and Twitter.

Deputy said in its announcement on Thursday that, alongside IVP, the funding round also attracted investment from OpenView, who led Deputy’s $33 million (US$25m) Series A round, with Australian VC firms Square Peg Capital and EVP also participating – with the deal representing the largest Series B raise in Australian history and brings Deputy’s total funding to date to more than $144 million.

“Having the backing and endorsement of IVP is a testament to the work that the entire Deputy team has put in to positively impact the future of work. They’ve backed some of the most exciting generational software businesses, and we’re delighted to be in such good company.

“We’re delighted with the investors who have backed Deputy: they’re the perfect partners for us, and bring a considerable amount of knowledge and expertise to the table. Not only will their support enable Deputy to scale and expand into new and existing markets, but we’ll be able to invest in enhancing our product to make real, tangible efficiency improvements to the way businesses operate globally.”

Eric Liaw, general partner at IVP, who will join Deputy’s board as part of the terms of the deal, said: "IVP has a long history backing some of the most forward-thinking technology companies, many of which are solving some of the world's biggest problems, and Deputy certainly fits within that criteria.

"The future of work is transforming dramatically. In a trend that started decades ago, businesses and workers around the world are moving towards flexible, hourly-based work. While this offers both businesses and employers greater freedom, the coordination of shifts and schedules presents an increasingly complicated set of pain points for workers and businesses.

“Existing solutions are antiquated; paper timeclocks, whiteboards in the break room and spreadsheets are woefully inadequate for an increasingly mobile workforce. Deputy brings an incredibly simple and effective technology solution to make work easier for both workers and their employers.

"What impressed us the most is the quality of Deputy's product. We spoke to many happy customers who were crying tears of joy at the benefits of Deputy. Hourly workers were similarly thrilled, they have more flexibility to work as many or as few shifts as they like, with more predictability. Business managers love the improved visibility and reliability, they now cannot imagine going back to the dark ages and operating their business without Deputy’s suite of tools. We are excited to support Ashik, Steve and team as they work towards their goal of having every shift in the world on Deputy."

Currently Deputy has more than 200 employees across Australia, the US and the UK, but, according to the company  that’s all about to change.

“While building our capabilities within our global markets is a key priority for us, Australia is where we started, it’s our home and will continue to be for the years to come. We’re growing, and we want to help Australia’s STEM credentials grow with us. As part of our new funding, we’re going to build Australia’s best product and engineering team,” Ahmed says.

With customers ranging in size, Ahmed says the new funding round will allow Deputy to scale efficiently and effectively globally while enhancing its offerings simultaneously.

“We now have over 90,000 businesses globally from small coffee shops in Sydney’s suburbs, to Australia’s most well-travelled airline, Qantas; from Aussie franchise success stories like Gelato Messina in Australia, to behemoths like McDonalds in the US. One of the best things about Deputy is that it can be scaled from small and medium sized businesses to large enterprise accounts. There’s a huge global demand for our platform, particularly as hourly paid employees account for two-thirds of the global workforce.”

The Deputy business was founded in Sydney, Australia in 2008 by Ahmed and Steve Shelley, with the aim to “make work easier for businesses worldwide”.

Commenting on the funding announcement, Paul Bassat, co-founder, Square Peg Capital, said: "We have got to know Ashik and the Deputy team over the last few years and have an enormous level of admiration for the way in which they are focused on solving a really important problem for both employers and hourly workers around the world”.

"Deputy holds the potential to become one of the most exciting businesses produced in Australia: locally founded but global in its impact. We are excited to back the business: it is a values led organisation which is passionate about being a great place to work and providing great outcomes for its clients."

Dan Demmer, partner, OpenView, said:  "The team at Deputy has continued to impress us since we first started working with them in late 2016.

"Ashik’s vision to run every shift on Deputy is enabled by a constant focus on the customer and an efficient product led go-to-market strategy. With such an ambitious goal, Deputy is sure to have a lasting impact on the way people work."

And Howard Leibman, founder, EVP, said,  “Over the past four years we’ve seen Deputy grow from a team of 20 to a team of over 200 and build deep capabilities across all aspects of the business. With its relentless focus on product leadership and a vision to transform the global hourly paid economy, Deputy is emerging as one of Australia’s truly outstanding software businesses.”

More in this category: « Nutanix says e-learning on the rise in Australian schools CeBIT Australia ‘defines’ its future in wake of demise of German event »
back to top