Assange-Russia claims because 'Moscow conspiracies flavour of the month' 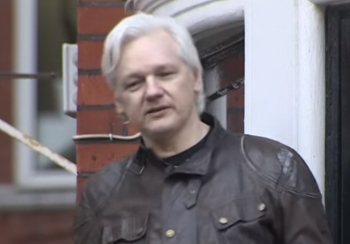 Claims that the publisher of WikiLeaks, Julian Assange, sought Russia's help to escape from the Ecuadorian embassy in London, where he has been taking refuge since 2012, have been spread because "Russian conspiracies are flavour of the month among some journalists", the well-known Australian lawyer Greg Barns says.

Barns was responding to queries from iTWire about recent stories in The Guardian and the Associated Press; the former claimed people close to Assange had held talks in London last year with Russian diplomats to evaluate if they could help him escape, while the latter said Assange had written to the Russian Consulate seeking a visa to Moscow as far back as 2010.

Barns said he was responding to the queries in his personal capacity; in the past, he has spoken to iTWire in his capacity as a member of Assange's legal team and an adviser to WikiLeaks.

"... the real issue is that Julian's health remains in jeopardy, because he has been unlawfully detained for six years because of the abject failure of the UK to deal humanely and lawfully with [him] by providing an undertaking that he will not be extradited to the US," Barns said.

But he saw some light shining through the dark clouds. "Fortunately some politicians are putting pressure on the UK with the pleasing news that a petition will be tabled in New Zealand's Parliament, signed by over 2000 citizens, seeking NZ Government support to assist Julian." iTWire has reported the New Zealand effort earlier this month,

Craig Murray, a former British envoy to Uzbekistan, and a well-known Assange supporter, said the Russian claims were bogus.

In a blog post, Murray said: "I was closely involved with Julian and with Fidel Narvaez of the Ecuadorian embassy at the end of last year in discussing possible future destinations for Julian.

"It is not only the case that Russia did not figure in those plans, it is a fact that Julian directly ruled out the possibility of going to Russia as undesirable. Fidel Narvaez told The Guardian that there was no truth in their story, but The Guardian has instead chosen to run with 'four anonymous sources” – about which sources it tells you no more than that."

Assange, who holds both Australian and Ecuadorian citizenship, has been taking refuge in the Ecuadorian embassy in London since June 2012.

Reports in July said that Ecuador President Lenin Moreno had either finalised, or was about to finalise, an agreement with the UK to end asylum protection for Assange. But nothing has eventuated since then.

Ecuador has blocked Assange from using the Internet since the end of March, after he criticised alleged human rights abuses by Spain at the time when Catalonia launched protests for independence.

More in this category: « MYOB boosts R&D spending Qualcomm accuses Apple of giving trade secrets to Intel »
back to top