Assange extradition to US fine, if execution ruled out: Ecuador Featured 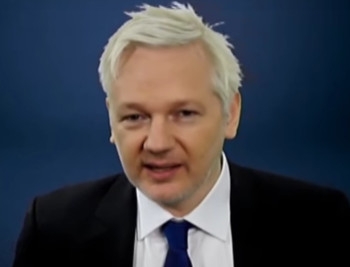 Ecuador President Lenin Moreno has said he has no objection to the UK agreeing to extradite WikiLeaks' publisher Julian Assange to the US, if there is an understanding that he will not face the death penalty for his publishing of leaked US military secrets.

In an interview with the Spanish newspaper El Pais, Moreno said Ecuador was not helping Assange to exercise his rights by prolonging his stay in Ecuador's London embassy, and therefore had to find a way to end the impasse.

He said any solution would have to ensure Assange's rights, especially his right to life, while at the same time it removed what was obviously a problem for his country.

"The ideal way out would be to talk with Mr Assange and his lawyer in order to consult them if he is willing to accept the conditions under which the United Kingdom provides the possibility of an exit," Moreno said according to a Google translation of his interview.

"And if that happens, we understand that there is a penalty that he would have to assume for having violated the principle of going to appear regularly before the British laws. And after passing that, immediately be able to enjoy the possibility of being extradited to a country where there is no danger."

Last week, as iTWire  reported, The Intercept  claimed that Moreno had either finalised, or was about to finalise, an agreement with Britain to end the asylum protection for Assange.

Ecuador signed a security agreement with the US in May, a sharp move away from policies pursued by the previous government led by Rafael Correa.

The editor of The Intercept, Glenn Greenwald, wrote in last week's report: "It is thus highly unlikely that Moreno — who has shown himself willing to submit to threats and coercion from the UK, Spain and the US — will obtain a guarantee that the UK not extradite Assange to the US, where top Trump officials have vowed to prosecute Assange and destroy WikiLeaks."

In April, Assange lost a bid in court to get an UK arrest warrant against him dropped.

The WikiLeaks publisher has been taking refuge in the Ecuadorian embassy in London since June 2012.

Ecuador granted him asylum in August 2012. He has had to stay inside the four walls of the embassy since then. He was recently granted Ecuadorian citizenship.

More in this category: « auDA directors to stay as motions fail on technicality PepsiCo gets court order to take down 'plastic' comments on Indian snack »
Share News tips for the iTWire Journalists? Your tip will be anonymous