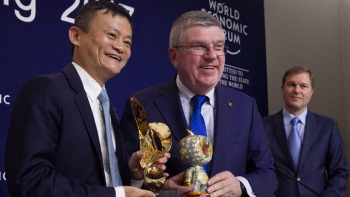 Chinese e-commerce giant Alibaba has signed an 11-year deal with the International Olympic Committee (IOC) to become a major sponsor of the summer and winter Olympics.

Under the deal, Alibaba will be a major Olympic sponsor until 2028 and will become the official Cloud Services and e-commerce platform services partner and a founding partner of the Olympic Channel.

There were no details given on the value of the sponsorship but Bloomberg reports a source “familiar with the matter” suggesting it is worth US$800 million over the 11 years.

Bach said the “ground-breaking, innovative alliance” would help drive efficiencies in the organisation of the Olympic Games through 2028, whilst also supporting the global development of digital opportunities including the Olympic Channel.

“In this new digital world, Alibaba is uniquely positioned to help the IOC achieve a variety of key objectives outlined in Olympic Agenda 2020, while positively shaping the future of the Olympic Movement.”

Under the terms of the partnership, Alibaba’s contributions to the Olympic Movement will include:

•    The creation of a global e-commerce platform for Olympic stakeholders to engage and connect with fans seeking official Olympic licensed products manufactured by the Olympic parties’ official licensees, and selected sports products, on a worldwide basis; and

•    Leveraging Alibaba’s leading digital media technologies and know-how to develop and customise the Olympic Channel for a Chinese audience.

The sponsorship deal includes Alibaba getting the rights to advertising and promotional use of Olympic marks and imagery from the Olympic Games as well as marks from the National Olympic Committees.

Alibaba is also the first Chinese company to commit to the Olympic Winter Games to be staged in Beijing in 2022.

Ma said Alibaba’s partnership with the IOC was built on a foundation of “shared values and a common vision for connecting the world and enriching people’s lives”.

“We are proud to support Olympic Agenda 2020, using our innovations and technologies to help evolve the Olympic Games for the digital era.”

More in this category: « Blue Prism sets up in Sydney to boost Asia Pacific presence Patents still ruled by tech companies »
BACK TO HOME PAGE
back to top