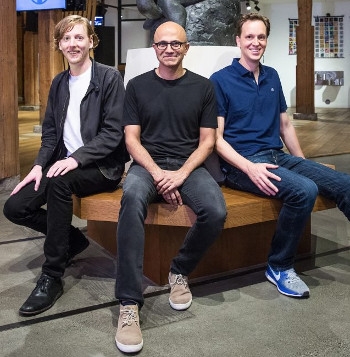 Software behemoth Microsoft has announced that it is acquiring software code repository GitHub for US$7.5 billion (A$9.79 billion) in Microsoft stock.

The announcement had been widely expected, with nearly every technology news site of note reporting it on Monday. The deal is expected to close by the end of 2018.

A statement from Microsoft said GitHub had something in the region of 28 million developers working on 80 million repositories. Microsoft has been one of the bigger code contributors to the site.

The reaction from open-source developers to the news has not exactly been salutary as can be seen from the embedded tweets and comments on Linux Weekly News.

“Microsoft is a developer-first company, and by joining forces with GitHub we strengthen our commitment to developer freedom, openness and innovation,” said Satya Nadella, chief executive of Microsoft.

I have felt a great disturbance in the force. As if millions of Octocat stickers cried out in terror as they were pealed away from laptops. #GitHub pic.twitter.com/ljxyehsNNS

“We recognise the community responsibility we take on with this agreement and will do our best work to empower every developer to build, innovate and solve the world’s most pressing challenges.”

After the deal is closed, Microsoft said it expected GitHub’s financials to be reported as part of the Intelligent Cloud segment.

One obvious way to show trustworthiness, Microsoft: open source the GitHub code. People don't use GH because it has secret magic but because everyone's already there; opening it wouldn't change that. And then we can all help fix the little annoyances that drive us mad every day. https://t.co/VgMYi5XxHn

"Non-GAAP excludes expected impact of purchase accounting adjustments, as well as integration and transaction-related expenses. An incremental share buyback, beyond Microsoft’s recent historical quarterly pace, is expected to offset stock consideration paid within six months after closing. Microsoft will use a portion of the remaining approximately US$30 billion of its current share repurchase authorisation for the purchase."

More in this category: « Third of 416 robo-debt claims found to be wrong Court blocks Google from banning Unlockd's Play Store access »
back to top