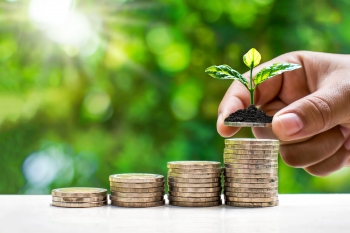 The company’s recovery on the market, is due to the work it is doing to help the world become a more sustainable place.

When COVID-19 struck, Vulcan’s stock was sold off to as low as 15¢ per share amid the uncertainty, having climbed to 38¢ per share — an almost 150% gain from the start of the year.

Since then, buyers have begun to return to the stock, more than doubling the company’s share price from its March lows to reach over 34.5¢ per share today at time of writing.

Further gains are predicted, with German research house Alster Research setting a price target of $2.45 (€1.45) per share on VUL. Alster stated, this would be “the first time in our company history of 14 years we initiate coverage with a ten-bagger”.

The $15 million capped Vulcan, is attracting increased attention as it seeks to supply the crucial battery material, lithium hydroxide, to the European electric vehicle battery market (EVBM) — the fastest growing EVBM market in the world.

The EVBM market will be crucial to the plans of governments around the world as they look at sustainable ways to come out of the COVID-19 pandemic.

The European Union, in particular, has set a goal to become climate neutral by 2050.

The EU has recognised climate change and environmental degradation as “an existential threat to Europe and the world” and seeks to build a resource-efficient economy where there are no net emissions of greenhouse gases by 2050 and economic growth is decoupled from resource use.

The European Green Deal is a roadmap for making the EU&#39;s economy sustainable. It will transform climate and environmental challenges into opportunities, boosting the efficient use of resources by moving to a clean, circular economy and restore biodiversity and cut pollution

To achieve climate neutrality in 2050, a European Climate Law has been proposed that would turn the political commitment into a legal obligation and a trigger for investment.

The EU says reaching this target will require action by all sectors of the economy and includes investing in environmentally-friendly technologies, rolling out cleaner, cheaper and healthier forms of private and public transport and decarbonising the energy sector.

Vice-President European Commission, Maroš Šefčovič commented: “We will set up a dedicated alliance to remove bottlenecks in the critical raw materials supply chain. Europe will need 18x more lithium by 2030”.

He added, “I’m absolutely convinced that the owners of electric vehicles want a “full story”. They want to know that the product, the car, has been manufactured to the highest environmental standards. That the raw materials have been extracted in a sustainable way.”

Thus, Vulcan could play a crucial role in the EU’s plans.

A scoping study undertaken in February by Vulcan, illustrated the potential for a combined operation producing lithium hydroxide and renewable energy, with net zero carbon footprint.

Importantly for the company, its investors and Europe’s sustainability targets, the Vulcan Zero Carbon Lithium TM Project became the first negative-carbon lithium project in the world — right in the heart of Europe’s auto and EV battery industry.

Vulcan’s assets are located in Germany’s Upper Rhine Valley, which includes Europe’s largest lithium resource. This is where the company’s strong management team is based and where it can best demonstrate its progress towards a commercial dual revenue operation (geothermal energy and lithium hydroxide).

Further, the rise of Europe’s auto and battery industries and the increasing political pressure to reduce carbon emissions will open doors for Vulcan in securing approvals and funding.

Given its rapid momentum to date, construction of Vulcan’s own pilot plant to demonstrate and de- risk the Zero Carbon Lithium TM Project is expected to be completed this year.

BACK TO HOME PAGE
Published in Sponsored Announcements
Tagged under
More in this category: « Breaches are Inevitable Preparing for the new norm beyond COVID-19 »
BACK TO HOME PAGE
back to top