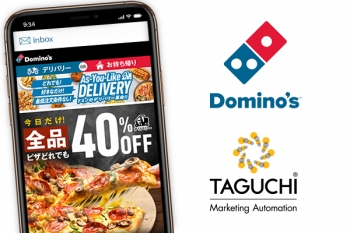 Under the arrangement, DPJ will use Taguchi’s revolutionary digital marketing and automation system to promote its network of 700 pizza restaurants across Japan, the largest country in the Domino’s group by store count.

Taguchi Managing Director Dean Maidment said the partnership was an extension of the great work Taguchi is already doing with Domino’s in Australia and New Zealand. “It’s been a great working partnership and we are proud to extend it into Japan,” he said.

“Our appointment to DPJ is recognition that Taguchi offers a more advanced world-class digital marketing service, developed and supported right here in Australia.

“Domino’s will be using Australian-designed software and systems to automate and personalise their digital communication to market pizzas in Japan, in Japanese.”

The Taguchi software, which was recently awarded a US patent, deploys Artificial Intelligence (AI) to review multiple elements of a digital marketing campaign in real-time and adjust them to better reach customers.

Mr Maidment said Taguchi’s advanced system could seamlessly operate in the Japanese market and language, with a specialist representatives appointed to streamline operations and support.

“The advantage of the Taguchi system is that it can easily adapt to operate in most markets and languages across the globe,” he said.

“The system will allow Domino’s Japan to more easily and efficiently tailor their digital marketing communication with more personalised and relevant offers for their customers, while providing management with constant analysis and feedback.”

DPJ Chief Marketing Officer, Todd Reilly said, “Our partnership with Taguchi is about delivering greater convenience and value to Domino’s customers, by enabling us to provide relevant offers at the right time to our growing number of subscribers in Japan.”

Domino’s Pizza Enterprises Chief Digital and Technology Officer, Michael Gillespie said, “As part of the Taguchi partnership extension into Japan, we will invest in new personalised alerts and notifications, which will allow our customers to save their favourite offers to their account and use them before they expire.”

When Domino's began operations as the first delivery pizza chain in Japan in 1985, there was no Japanese word for pepperoni. Since then Domino’s has led the way with its distinctive three-wheel scooters and unique products, including ‘Quatro’ pizzas, with pepperoni now one of the most popular toppings.

Mr Maidment said the timing was ideal with new APAC markets opening up, and Taguchi is

pleased to be working closely with Domino’s to drive its Japanese expansion.

Taguchi offers a world-class digital marketing platform that is owned, operated and directly supported by Australians, in Australia, for Australian marketers.

Established in 2009, Taguchi has grown into a strong and profitable local business with service operations in Melbourne, Sydney and Singapore. For more information Taguchi website.

BACK TO HOME PAGE
Published in Sponsored Announcements
More in this category: « Taguchi granted US patent for unique digital marketing technology Ping Identity Launches Consumer Data Right Integration Kit To Support Banking and Fintech Compliance with Australian Regulation »
Share News tips for the iTWire Journalists? Your tip will be anonymous