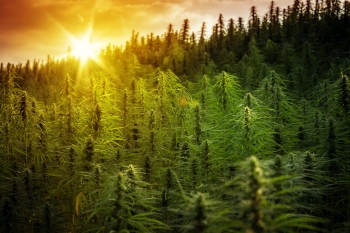 The confidence in the market was highlighted on Wednesday this week, when GW Pharmaceuticals Ltd. GWPH, announced it was being acquired by Jazz Pharmaceuticals PLC JAZZ in a $7 billion deal.

GW develops Epidiolex, a drug that won US Food and Drug Administration approval as a treatment for severe forms of childhood epilepsy in 2018, while JAZZ is a specialist in sleep medications.

“We don’t think this is the last deal we will see in the sector,” said Nawan Butt, portfolio manager of the Medical Cannabis and Wellness UCITS ETF UK:CBDX.

“It is also another example that the cannabis industry is continuing to normalise and evolve beyond the traditional cultivation of flower, with potential well outside of our borders,” said Wilson. “For investors, the acquisition of GW Pharma is another reminder that investing in cannabis touches many verticals globally, requiring a diverse approach beyond traditional cannabis cultivation companies,” ETF Manager Group’s Jason Wilson said.

An improving regulatory environment is also speeding along the acceptance of pharmaceutical cannabis products.

The industry was boosted by the election of Joe Biden to the US Presidency. The Biden Administration is expected to pursue an agenda of reforming the U.S.’s strict cannabis laws.

This would see cannabis declassifies as a Schedule I drug, alongside heroin.

Meanwhile, New York is expected to legalise cannabis in 2021, Mexico has published federal medical cannabis regulations and the United Nations is also removing medical cannabis from its list of dangerous narcotics.

Amidst this changing landscape, it is not just the major companies such as GW Pharmaceuticals that have been able to capitalise.

ASX listed Creso Pharma Limited (ASX:CPH; FRA: 1X8) has been consolidating its position as one of the few ASX-listed companies in the cannabis sector that is generating material revenues.

Investors who took a stake in Creso Pharma approximately three months ago are now looking at a near ten-bagger.

However, the company says “we are just getting started”.

This week, the company announced it had received four new purchase orders (PO), received repeat orders from existing clients, entered yet another new market and forged a relationship with a new client that has a government-owned retail cannabis monopoly, while also notching up its first sale of a new strain of the flagship Ritual Green brand.

The new orders include a maiden purchase order from Cannabis NB, the government-owned retail cannabis monopoly in the Atlantic Canadian Province of New Brunswick – an important new market for CPH.

During the quarter ended 31 September 2020, Cannabis NB sold C$20.1 million worth of cannabis, which represented a 23% quarter-on-quarter increase.

Importantly, one of these POs marks Mernova’s first-ever order for Black Mamba, the latest premium quality offering to be sold under the Ritual Green brand.

Commenting on the strong order flow, entry into new market and first sales of a new strain, Mernova managing director Jack Yu said, “To receive our first PO from the Province of New Brunswick, as well as additional POs from the NSLC and the Yukon, is a great way for Mernova to start the year, and shows that 2021 should be promising for us.

"New Brunswick is proving itself to be a rapidly growing market, with strong demand for cannabis, and we are excited to have Ritual Green products for sale online, and in stores province-wide.

“Sales in the Yukon are proving to be stronger than anticipated, with Triple J’s Canna Space selling out of all Mernova products purchased in their initial order.

‘’We expect this trend to continue, given the high demand for our products, and look forward to filling a number of new POs expected shortly.

“In a major development, we are also excited to have launched our Black Mamba strain.

‘’We are very excited for our customer base to try our latest premium quality Ritual Green offering.

‘’There has been great interest in this strain, and we expect Black Mamba to be as well-received as the rest of the Ritual Green family of products.’’

Pointing to the future, Yu said, "These latest POs show that our Ritual Green brand products continue to gain traction and that we are developing a reputation for quality.

‘’Product sales on a province-by-province basis are progressing well, and we look forward to the imminent launch of our Ritual Sticks, and Ritual Black brands. We are just getting started.”

In the December quarter, Creso received cash of more than $709,000 from its customers, representing a 740% increase compared with the prior quarter, and management expects further increases in the March quarter of 2021.

Commenting on Creso Pharma’s strong December quarter, non-executive chairman Adam Blumenthal said, “The quarter was a period of rapid growth for the company. Creso achieved a number of major milestones in international markets, which were underpinned by favourable regulatory shifts.”

“Pleasingly, Creso continued to expand its global footprint. Through the company’s animal health business, we entered the Latin American market and Mernova continued to gain traction in Canada, progressing agreements and purchase orders to unlock a number of new provinces.

''The company also furthered its presence in the Australian and New Zealand market, securing an agreement with Martin & Pleasance to drive growth.

“Strong sales were achieved over the period, stemming from a scale-up of Mernova’s operations and the receipt of a number of new orders.

''While the uptick in customer receipts is very pleasing, we are now focused on continuing this rapid growth.”

BACK TO HOME PAGE
Published in Sponsored Announcements
More in this category: « Achieve 400G Capacity Per Wavelength with PacketLight’s PL-4000M Muxponder 100% of customers recommend Snowflake for fourth consecutive year in Dresner Advisory Services ADI report »
Share News tips for the iTWire Journalists? Your tip will be anonymous