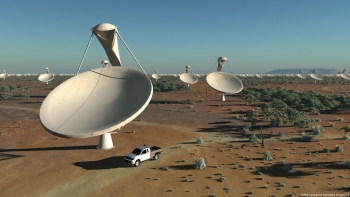 Australian scientists have announced they have found a new way to use the telecommunications network to synchronise radio telescopes, which help scientists peer into deep space.

The team, including researchers from the Australian National University, say that linking radio telescopes in an array currently requires that each telescope has access to an atomic clock to record the precise time when a signal is detected from an object in space.

But co-lead researcher Professor Ken Baldwin from the ANU Research School of Physics and Engineering said the team demonstrated for the first time that a stable frequency reference can be reliably transmitted more than 300 kilometres over the fibre optic network to link two radio telescopes.

“The new technology we’ve developed could be particularly useful for the Square Kilometre Array, a global effort to detect faint radio waves from deep space with a sensitivity about 50 times greater than that of the Hubble telescope,” said Professor Baldwin..

“This highly stable method for transmitting the frequency reference promises to replace the need for expensive atomic clocks, which cost around two hundred thousand dollars each.”

Square Kilometre Array is an international effort to build the world’s largest radio telescope using arrays in Australia and South Africa. Individual radio telescopes will be linked to create a total collecting area of about one million square metres.

“The new technique doesn’t require any substantial changes to the rest of the fibre optic network and is easy to implement,” Professor Baldwin said.

“By running the experiment on optical fibres also carrying normal traffic, we showed that transmitting the stable frequency standard doesn’t affect the data or telephone calls on the other channels.

“This is necessary to gain the cooperation of the telecommunications companies that own these fibre networks.”

ANU conducted the research (published in Opica) with Australia’s Academic and Research Network, CSIRO, the National Measurement Institute, Macquarie University and the University of Adelaide.